My Tweets
Posted on March 15, 2014 Uncategorized

If Sweden has taught me anything, it is the joy of choir singing. Everyone sings, it seems. It is not something embarrassing to know your traditional songs and you earn your shots at a dinner party by singing before. In Germany, I have recently noticed, not only are there much fewer choirs, it is even seen as something kind of extraordinary. “It’s not weird, but it is special”, as my friend Anja phrased it. Or my colleagues you said, “Oh, you know, Irmgard also sings in a choir”, as if we should hang out together now with our crazy little choir cult.

Even though I really do not have any time these days (all I do is: work – look at apartments and get lost in the city – sleep and then repeat), I made time for the choir rehearsal of the Swedish Church choir this Tuesday because I had very good choir experiences before (basically, joining the Uppsala choir was the best decision I made during my Master progamme). The moment I stepped in, I already felt – schizophrencially – at home for the first time in three weeks. It is really funny to notice that outside the work place, my brain has still not tuned in to German. I still am amazed when people speak German around me, I want to draw my company nearer and say, “They’re Germans! I can hear it!”

So when I went into the Swedish Church and heard all the old ladies chatter in Swedish about the upcoming choir events, it felt very familiar. It got even more so when I went to check out the restroom which actually has Swedish doors! Now you might wonder what a Swedish door is. It’s a door with an instable handle and it is made out of paper. Kind of like this: 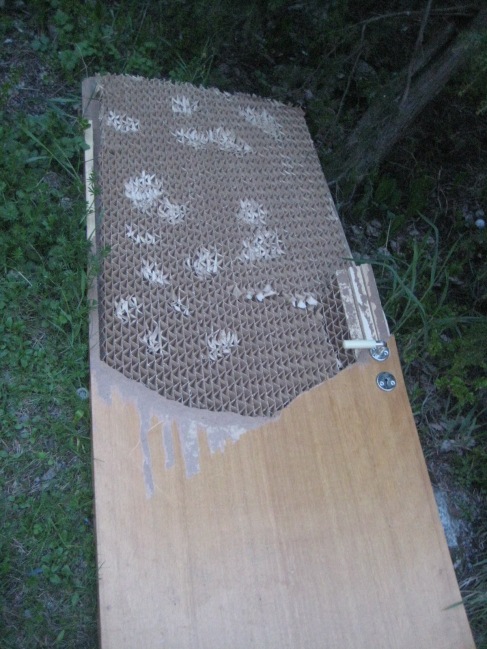 They don’t exist in Germany so I presume the church has imported the toilet doors.

There was another new member that night, a German old lady, who was very friendly and said that if I really do not find a room, I can move into her convent. As a sign of gratitude I acted as a her translator the whole evening because despite the complete absence of any Swedish knowledge  in her brain, she has deemed this choir to be suitable. From what I know by now she is a really cool old lady who does lots of special stuff. Like singing in a choir which is, as we learned, special. It is so special that even the pastor and his wife are in the choir and then a bunch of very diverse members, from pensioners to young almost-too-cool men.

The point of the Swedish Church is to have a choir rehearsing in Swedish and to preserve Swedish cultural heritage, or at least that is what I have understood. To find a capable choir leader who speaks enough Swedish and is willing to lead the choir must have been a challenge, but now they have a nice and strict choir leader who does it. She speaks funny Swedish with a the thickest German accent imagineable and she has apparently decided that there is only one article in the Swedish language and that’s “en”. If you meet me next time and I speak like that you know why. Years and years of trying to learn all the ett-words and now they will be swept from my mind…

Regardless of that her choice of songs were quite lovely and even if it will take a while until anyone will live up to my former choir leader, it was an inspiring rehearsal. I don’t get why people stay at home and watch TV when they can be “special” and sing in a choir instead!

Another great thing about the church and the choir: It’s at Landungsbrücken, probably one of the most beautiful places in Hamburg. Even if my photo sucks.

I wish I was a soprano though. When I decided (yeah, I decided) that I was an alto, it was more of an intuitive choice that proved correct. I had not taken into consideration that the altos almost never get to sing the melody, and nowadays I wish a I was a soprano. Because even if I could find the songs online (Glädjens dag, anyone?), listening to them would make me get used to the melody, not the voice we’re singing, or supposed to sing.

I think I will be back next Tuesday. I miss the toilet doors.