My Tweets
Posted on March 18, 2014 Uncategorized

In the neighbourhoods I looked for apartments, they have difficulty with correct German: “Wir kaufen Ihre Auto”.

One of the reasons I moved to Germany was that the housing market functions differently. Renting apparements is a much more common practice here than in Sweden. When people told me the housing situation was difficult in Hamburg, I smiled and said, “Look, I’ve seen Stockholm, nothing could be worse”.

And it’s still true. Compared to Stockholm, there are tenant flats here. So in theory you can rent, long-term even. Move in and live there as long as you want. In practice, Hamburg seems to follow the Nordic example of gentrifiying a city to death and not building enough.

I have two weeks left in my interim room. The last three weeks, I have spent every single evening after work with running around town to look at at least three apartments every night. One of the problems is that people living here keep telling me that basically you can only live in two parts of town, everything else is “really far away” or “white trash”. It is like saying that you can only live on Södermalm and Östermalm. Because I have no orientation in Hamburg, obviously this advice rather confuses me. Also, I wonder how the white trash affords those rents…

Last weekend, my parents sacrificed their weekend and went to ten apartments with me. Half of the aparements are completely out of the question. They do no have heating, or they lack windows, some have mold (“We will fix this”) and it happens surprisingly often that they are located on top of a brothel (right now, I also live on top of a self-employed prostitute as I recently learned). The other half is okay-ish to nice and for those apartments an average of 270 people “apply”. Because you are an “applicant”. I always thought that kind of implied you get a job/scholarship where you are paid money, not something where you offer your money. 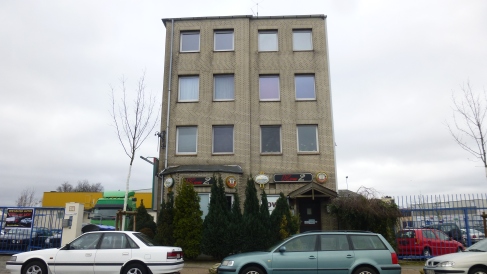 I’m on top of the world, eeh, a brothel

So you come to the apartment with at least 50 people and the real estate agent does not care at all about who you are but only collects your “Mieterselbstauskunft”, an application form where you have to attach things like your last three income statements, a letter from your current landlord that you are a good tenant, where you work and since when, if you are German, where you were born, a  positive credit report, copies of your passport – actually, I am surprised you do not have to submit information on your sexual preferences.

Now I am testing new ideas. Yesterday, after a totally wasted weekend, I was once again considering to pack my belongings and move into one of my friends’ living rooms in Stockholm. But then my fabulous friend Ingrid came for dinner and we drew a notice. My mom suggested putting up notices in town because maybe someone who reminiscenes on old times when internet did not exist yet has an apartment and thinks my notice is so charming and old-fashioned that s/he calls me and rents her/his apartment to me. These notices are not that uncommon so Ingrid and I figured we had to woo the apartment owners.

Soon all of town will know me…!

So Ingrid drew a portrait of me and we played the Sweden card. (Being associated with Sweden, and be it only that you have moved from there, immediately make you 100% more popular with most Germans.) Then we offered a 500 euro reward for the deciding hint. But then we remembered that people who own apartments tend to be wealthy and maybe do not need 500 euros. We were sitting there on the sofa with a pizza and brainstormed, “What can we offer that you cannot buy?” Luckily, Ingrid and I are both a bit crazy and I am willing to do a lot for a place to live and Ingrid is just great and therefore willing to help me. So we offered all the thing we are good at: baking, party planning, teaching languages, drawing, writing songs, and giving city tours. I was tempted to offer both religious advice (jag som katolik!) and marrying the landlord’s son, but we took that away again.

Today I started putting up the notices in Hamburg. I shall be excited to see if someone replies.

Also, in case this has not signaled clearly enough to you that I need you to keep your ears open:

If you happen to know of anyone in Hamburg who is renting his apartment, let me know! Even if it means I have to marry your son.

One thought on “Helen, soon to be homeless?”