My Tweets
Posted on August 10, 2014 Uncategorized

One of the Goethe quotes I entirely agree  with is,

“The world is so empty if one thinks only of mountains, rivers and cities; but to know someone who thinks and feels with us, and who, though distant is close to us in spirit, this makes the earth for us an inhabited garden”.

As I think I said before, my apartment, regardless of how nice I try to furnish it, only becomes that inhabited garden when my friends visit. These past weeks I have been very lucky to every weekend have one of my dearest people around. When I tell my co-workers on Thursdays, I am having a visitor over, they say, “Hm-hm, tell me something new”.

This weekend, Emily came from London. Being friends with Emily still amazes me after more than four years because it proved to me that being very close to someone works even if you are thousands of miles apart. (There is also a few more amazing things about our friendship.) She spent the last year studying in London which increased our hours together by like 500% and when we were talking this weekend, I realized that Emily knows so many important people in my life despite the fact that during three of the four and a half years we have been friends lived on the other side of the world. Still, she managed to meet my parents, my extended family including my grandpa, my siblings by choice, my Uppsala friends, my Stockholm friends, my Hamburg friends, my Bremen friends and my cat.

The weekend was quite exhausting though because we were invited to two parties (Emily: “Combined, we’re so popular!”) Also, I wanted to take her to some places and we had to manage the usual weekend things like panic grocery shopping.

Emily studies Transportation Planning which I actually find fascinating in a way and in order to make this an academically rewarding visit for her, I made sure we used multimodal transportation. (I did not know what that word meant before I said, “Okay, no trains running anymore, we’ll take a bike from the bike pool” at 3 a.m. last night.) We also inspected HafenCity, Hamburg’s new city part where urban planning can be seen in action and Emily taught me that in modern underground stations, you also build the exits in a way that lets people already see the light from the platform.

We concluded that the HafenCity metro station is so clean, it’s “even more than Stockholmclean”. This is how I imagine Singapore.

The icecream is on a date with the chair, Emily analysed 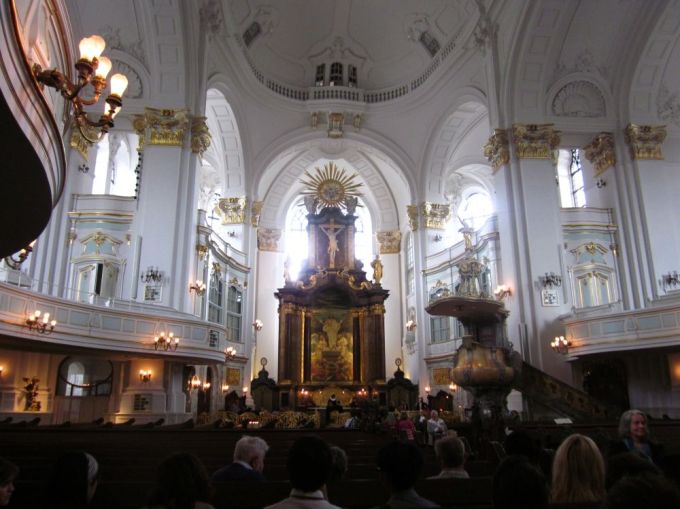 Hamburg’s landmark, the St Michael Church. Entrance 2 euro, going up the tower 5 euro. I think there should be discount for people who pay church tax!

In the evening, we set out for a journey so far out I wasn’t even sure if my ticket was still valid there. I am proud to say that thanks to that trip, Emily has now seen 7 of 16 German federal states, and four she was introduced to by me. We were going to Kajsa’s place for her farewell dinner as she moves back to Sweden next week. Kajsa lives in Quickborn which Emily and I immediately started calling Slowdie (yeah, we’re totally silly like that) and it took us 90 minutes to get there. First on the metro, then on the commuter train, then on the regional train, then a 15 minute walk through the fields of Quickbornslowdie. Like I said, I wanted to show Emily that we had all kinds of transportation modes here! At Kajsa’s we met the Swedish group (depending on who I talk to I call them the young Swedes or my Bible youth group but they are not religious at all) plus friends which led to a language confusion that one of the guys solved by pretending to be a living subtitle for Emily. (“Now the girls are debating about the cake, I can live-twitter for you, hashtag sandwichcake!”)

Kajsa had made a smörgåstårta, a cake made out of sandwiches, and I had been commissioned to make the sånghäfte, the song book. Emily had designed it, Annika had printed it and I had to lead the singing which went amazingly well. It was perfect training for the crayfish party that is coming up at the end of next week and where I am again the song-responsible part. During the time that we did not sing ourselves, Kajsa put on her Swedish music playlist and since we are extremely close in taste (the list included “Vill ha dej”, haha) when it comes to that, I thought that was fantastic. 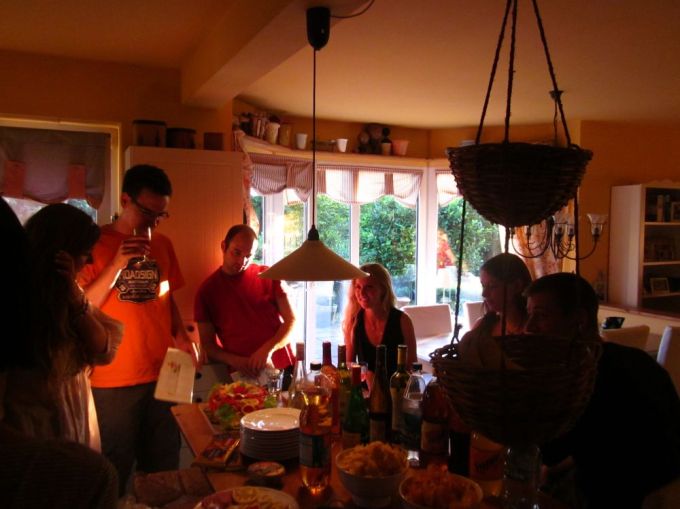 Since we were also invited to Anja’s birthday party and it took a while to get out of Slowdie, we had to leave Kajsa’s party before it was over. At Anja’s we got to eat more delicious food and hung around till really late, resulting in me feeling really hungover today. We also missed church service but since I wanted to show Emily the church, we went for coffee there later.

After that, we already had to head to the airport and were confronted with the fact that in four weeks’ time, we’ll be separated by the Atlantic again. The last time we didn’t see each other for 3 years and 4 months. This time, we’re planning to halve that time…I better start saving up for 2016.