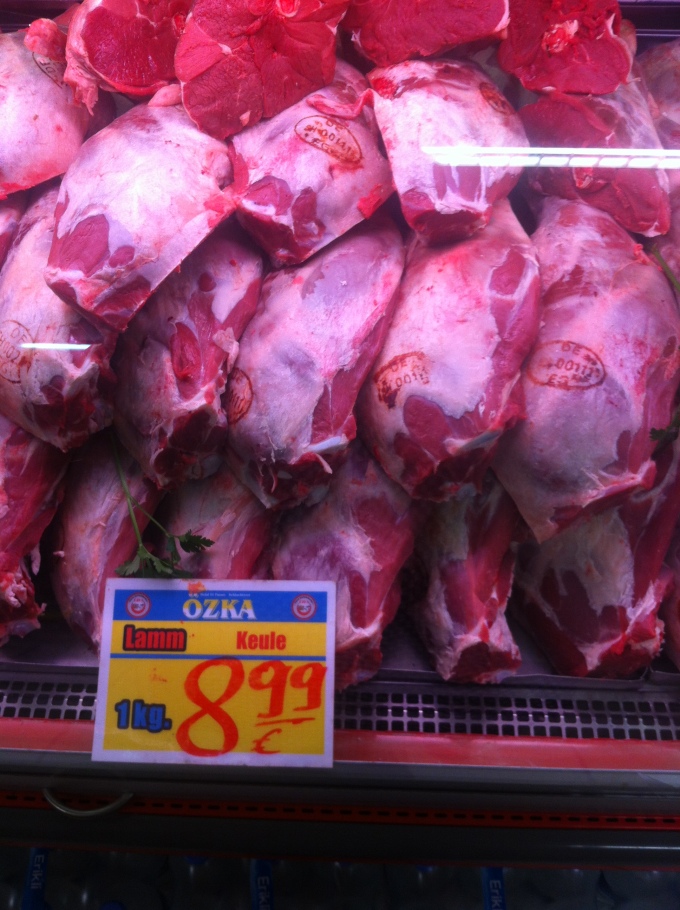 Last week I went to Lohmühlenstraße. I was sent there by a hairdresser who I had gone to. She was undeniably Persian, her hairdresser’s shop was called Mojgan’s. (My parents considered calling me that as a second name and I wish they had, so I am always happy to meet Mojgans.)

I always prefer Turkish and Persian ones because they know how to pluck eyebrows with a thread. Also, I could ask Mojgan where to buy lamb meat. My favorite dish is a stew my mom makes after a Persian recipe that requires lamb. No, pork won’t do. Beef will make it taste very differently. Lamb is expensive, but you can get good value for money in the so called Turkish shops. Mojgan directed me to Lohmühlenstraße. I get off the metro and saw a lot of oriental shops, some women with veils, and the minaret. That is not the most unusual sight in a big city and I proceeded into a store. I bought lamb at the counter. The butcher switched between German and what I think was Turkish. Most people did not speak German in there. I wanted to buy sliced tomatos as well and checked the shelves. Everything was in Arabic. I didn’t understand a word and I could not find out by the red packaging if the tomatos were sliced or not. For a short moment of irritation, I thought, “This is so annoying. Do they really have to be all-non-German in here?”

I believe that being an immigrant somewhere significantly can change the way you look at non-natives. Because as I stood there in the store where I could not understand the tomato can, I re-examined my own behavior. I remember how going to the German Bakery was the Saturday Morning highlight in Stockholm. I remember how I went in and greeted them in German. One time the shop assistant replied, “Eh, du får prata svenska med mig, jag kan ingen tyska”. I wonder if he thought, „Do they really have to be all-non-Swedish in here?“ I usually did my grocery shopping at Lidl because that was cheap. While that was the foremost reason, it was also pleasant that you knew what you got because they sell the same stuff as in Germany. Sometimes I held a tomato can in my hand that had only German (and Finnish?!) writing on it and wondered how Swedes find out if the vegetable in there was sliced or not. And in Hamburg, I have been to the Swedish grocery store because I craved Marabou Salt and Pecan Nuts which only exists in Sweden. The shop assistant switched between Swedish and German. Just like the Turkish butcher.

It’s very close to being the same story, just that people regard German and Swedish foreigners as ‘better’ foreigners. The Swedish store is in the fancy part of town, Lidl was on a nice street. Lohmühlenstraße is, well, close to the central station. Germans and Swedes are not feared – in this current period of history. But really, the differences in habits seem small to me between the good and the better immigrants.

I think about how luxurious it is that I can make use of trade and craft that originally does not exist in Germany: like thread-eyebrow-plucking and Marabou Salt and Pecan Nut.

Sweden is voting in their national election on Sunday. I am genuinely exasperated that I, not being a Swedish citizen, cannot vote. I rely on the sanity of the Swedes to go to the ballot box. I rely on the citizens of a once proud modern state to manage to change course so that I don’t have to feel embarrassed by proxy for four more years: The xenophobic right-wing party has 11 procent in the polls, making it the third strongest party. My thought experiment above is what I have to say to that.

(Video can’t be embedded so I am linking to it:) This little girl is crying, “I also want to vote!” as her daddy tells her you have to be 18 to vote in Sweden. I feel a bit like her.