One of the main things in the integration process in a new country is to understand the media landscape in order to consume the right information. You cannot imagine how impressed people are when you – through carefully reading the women’s magazine amelia – know who Tilde de Paula is (a Swedish c-list celebrity). One of my Swedish friends here in Hamburg told me he watches the German show “Bauer sucht Frau” (Farmer seeks Wife) and I am sure that’s a great way to start small talk with Germans.

So when I got this question, I immediately thought of Hustysk Helen svarar:

“What is the equivalent to P1 in Germany?” 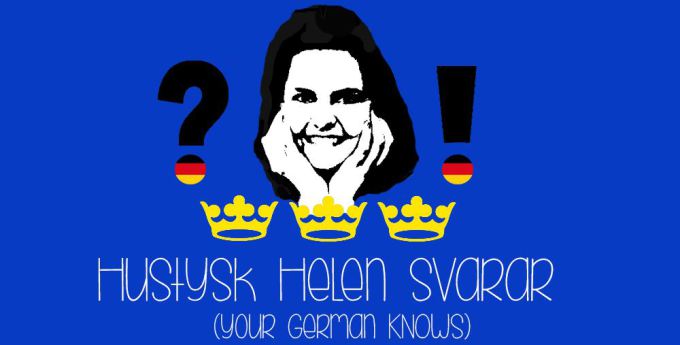 I should maybe first explain that P1 is a Swedish public radio channel that I was introduced to as “The Talk Channel”. On P1, they talk about serious things, it’s like the educational radio. P1 reaches, I would think, most listeners with its lovely summer programme, “Sommar i P1” where important people talk about their lives.  P1 covers news, community programmes, culture, radio drama, debate, science, philosophy, international issues – you get the idea. If you go, say, to the Nobel Prize Award Dinner, it would certainly come in handy if you listened to some P1 before.

So what do you do if you happen to be seated next to Frank-Walter Steinmeier, German’s Foreign Affairs Minister? (He is invited because the Foreign Ministers get to come if there is a laureate from their country and you will hardly have missed that Stephan Hell won the Physics Nobel Prize (“Nobel Prize goes to Hell”)).

Which radio channel in Germany can prepare you for pleasant yet educated small talk with Frank-Walter? I don’t know if it surprises you or if I emphasized the “Germany is a land of thinkers”-topic enough, but there is more than one such radio channel. Let’s start with the nation-wide Deutschlandradio service that operates the channels Deutschlanfunk and Deutschlandradio Kultur.

Deutschlandfunk covers news and documentaries about covering politics, economics and science. It is an important player in the media field and very often quotes later in the day in the newspapers and television shows read, “She said earlier today on Deutschlandfunk that…”.

Deutschlandradio Kultur on the other hand is more directed at culture as the name suggests. The channel is noted for its radio plays and feature productions and covers  the arts, culture, and science. You think this sounds boring? Ah, no. Deutschlandradio is a lovely break from the commercial blabla-radio and it addresses topics like “40 years of IKEA in Germany”, “How train strikes fuel carpooling groups on Facebook” or “Are state-owned casinos allowed to sell Warhol pictures?” Well, I think it’s intriguing actually! And a brilliant bunch of topics for the Frank-Walter-dinner.

If these two do not cater to your taste, do not fear – there is more!

Germany is split into 16 federal states and pretty much everyone has their own radio station, I guess. (Not quite, of course.) I will only cover a few now. The west is covered by WDR (Westdeutscher Rundfunk) that offers WDR 5, a channel that focuses on information and culture. The North, like Hamburg, also receives NDRkultur where they broadcast things like “Redezeit” where you can call in and discuss political matters. NDR (Norddeutscher Rundfunk) also has a channel called NDRinfo that I listen to at night and I always happen to tune in “Am Abend vorgelesen” (Read to you at night) where they read whole books, usually the kind of books that make a good impression on Frank-Walter. Currently it’s “Die Verwirrungen des Zögling Törless” by Robert Musil. After that half-hour of good night reading, “Notturno” follows, a music programme to calm you down before going to bed. You cannot say German radio is not taking good care of you.

I mostly listen to NDRinfo because I have to pay a a substantial amount of radio fees. Please start listening, too, so that I can feel the fee is doing good work!

2 thoughts on “Hustysk Helen svarar: Listening to the radio”