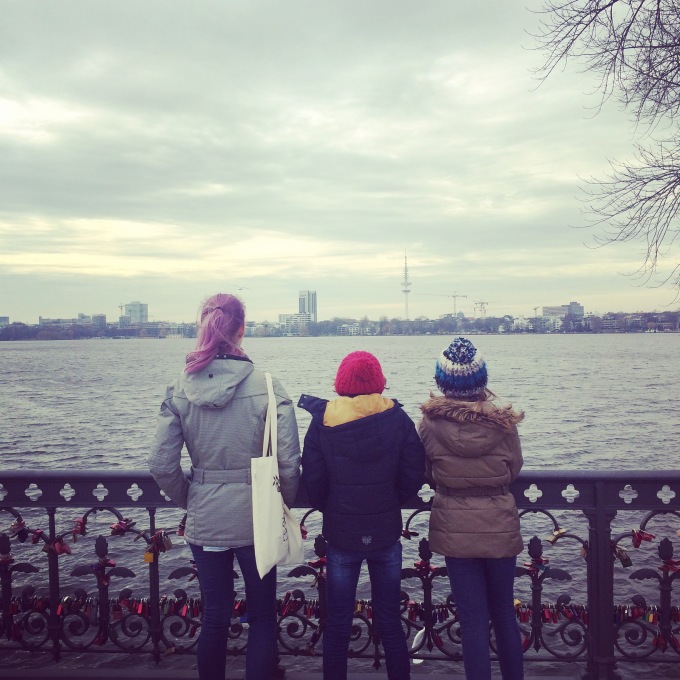 My (extended) family is large. Both my parents have seven siblings and my stepdad has four. So it comes as no surprise that I have very many cousins but a funny detail is that I have only three female cousins on my maternal side. We are 14 grandchildren and only four girls. For the occasion of International Women’s Day, I gathered the other three in Hamburg for a girl cousin get together.
I am the oldest of the cousins (now you realize why I always act so incredibly responsible, right?). This weekend, I hosted a 23-year-old, an eleven-year-old and a nine-year-old. The two younger ones entered my apartment with their suitcases (who said you need less than a suitcase for one night?) to then inform me that they had pressing shopping needs. “I need shoe strings”, my cousin and godchild said. “They have to be really long”. Shoes seemed to be a theme because the youngest explained that she needed shoe polish “for my ma and pa”.
These items were so important that my young guests could only partly pay attention to my explanations about the city we were discovering. When we finally had acquired the items, concentration could shift back to the city hall, the old Elbe tunnel and a lot of Smart cars and yellow cars. Whenever they saw one, they patted everyone on the closest body part. It must be some kind of game I did not know because “you don’t even have a TV, how do you know anything?” Despite my older cousin’s and my efforts to draw the younger ones’ attention to alternative means of information (books, newspapers, internet), our cousins shook their heads at our ignorance.
Our main activity on Saturday was a tour in The Dialogue in the Dark which is an exhibition where you get to see nothing. Literally nothing because everything is pitch black dark and if I say that I mean entirely dark. For 90 minutes, you are blind. A sight-impaired guide leads you through the exhibition that shows typical everyday life situations like crossing the street, going to a bar or shopping (fruits and vegetables, not shoestrings though). Dialogue in the Dark is a most wonderful project, it is both fun and educational and it appeals to the senses in a very special way. When you come to Hamburg, this is where you should go.

Dialogue in the Dark

The evening was spent with cooking spaghetti Bolognese (we actually let the little ones handle the hot frying pan) and laisser-faire bed times (“I am not tired”). In the morning, my two younger cousins wanted to wake me earlier than we had decided but their wake up strategies are not really cutting edge yet. It was easy to sleep through the first two hours of clapping and whispering, “Heleeeeeen”.
Sunday brought splendid weather in Hamburg so we decided to go to the park. In order to go to the park, you need to take the circle line U3. I live on U3 but Ingrid and I still occasionally fight about which direction to go in the circle. “Helen and U3, a never ending story”, she usually sighs. Because I wanted to equip my younger cousins with public transportation competence, we explained the circle plan to them and let them choose where we would get on and get off. In the course of this complicated endeavor, I started talking to a conductor who had just ended his shift. When we got off the train, my younger cousins gave me a strange look. “Do you always talk to random people?” Well, actually, yes. In the park, we climbed (okay, took the elevator) to the top of the planetarium and looked all over Hamburg. That’s something I can recommend doing, too, and it’s free.
Because there are no school holidays right now, my cousins had to leave on Sunday afternoon. I spent Sunday night watching “Still Alice” and yes, that is yet another thing I highly recommend. There were several things that appealed to me in the movie, not only Julianne Moore’s performance. I also enjoyed the portrayal of an intellectual women who was able to articulate herself so well (that is before her Alzheimer’s) and a couple that appeared so loving. Then, of course, it was not really realistic that Alice is a super accomplished Columbia professor with three children, the oldest in her late twenties, when Alice herself is only 50. Or maybe I am just not ambitious enough but it does not quite sound like the academic reality? That aside, it is a movie worth watching and brings attention to a disease that usually does not really take place in popular media. Go see it.

One thought on “Girl Cousin Gathering”