My Tweets
Posted on November 2, 2015 Uncategorized

This weekend, Anna visited me. We partially grew up together and we still love being around each other. I was made her patron at her confirmation this year and my gift was that we would go to the Taizé night in Cologne together. Before that, we spent a day in sunny Dizzeldorf, trying to complete a city rally. The questions were tough, the solution word was ridiculously easy (“Welcome to Düsseldorf”, lame). We learned that Düsseldorf had the high-rise office building in all of Germany, built 1922, and discovered a very picturesque little square in the middle of town, well hidden behind two churches.

As we were standing there, trying to figure out where to go next to find out the next solution, two men stopped. “Helen? Are you Helen?”, one of them said, removing his sunglasses. My brain immediately started chattering. Was this someone from choir? Maybe from work? Have I met him at some newcomers event? Was this someone I knew from out of Düsseldorf? “Ralf”, he said and strechted out his hand. It dawned on me. Of course! This was my mother’s cousin, his mother had told me he lived here and she took my details then to inform him. I apparently have predisposition to meet formerly unknown relatives in the most unexpected places (see here). But how on earth did this friendly fellow recognize me when walking by given the fact that he has not seen me for, like, 25 years? “You resemble your aunt”. That’s not the worst.

Anna and I also went up the Rhine Tower overlooking town 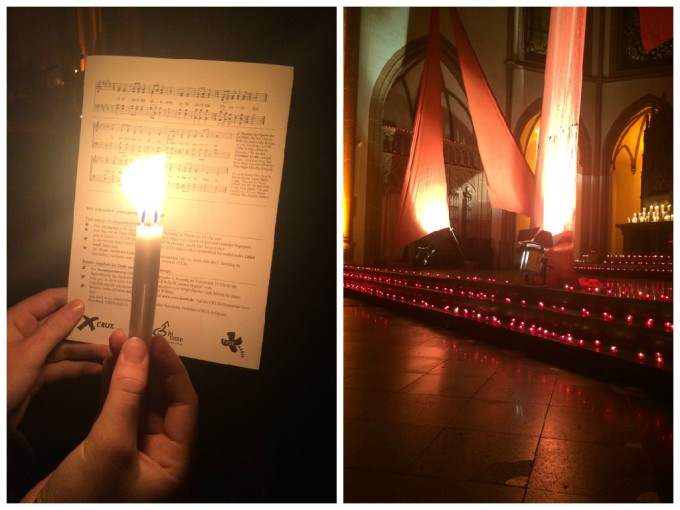 The Taizé Night was impressive and meditative