The first thing I saw of Barcelona was a container ferry with the letters “HAMBURG SÜD” on it. I had fallen asleep almost immediately as the plane went up in the Düsseldorf sky and only woke when we were approaching the capital of Catalonia for landing through what I believe was the industrial harbor.

I travelled to Barcelona because my friend Michelle studies there for a year. Our mutual friend Malin also came and so we reunited in the sunshine: There was splendid weather all weekend! By that I mean 15 degrees and blue skies.

Malin, Michelle and I once met in the choir in Uppsala and so it was of little surprise that we marched through the streets of Barcelona singing Christmas songs. Michelle was our most excellent host, she provided real beds for all of us thanks to her foldaway beds. Two beds hidden away in a cupboard, how awesome is that? I think I need to get a bed cupboard as well. Fortunately, Michelle also lives very centrally so it only took us a short while to get to the one thing I declared my must-see: The Sagrada Familia church. Barcelona is a nice city with lots of interesting sights and museums, bars and beaches to enjoy and shopping opportunities. But none of these can compare to that church, a monument you won’t see anywhere else, a piece of art that will not travel to any gallery near you. You have to go on a pilgrimage to Barcelona to see it.

Just like with anything that is hyped, expectations were rather high when we got into Gaudí’s most famous work. But, oh so lucky we were to have sunshine breaking through the stain-glass windows, creating spectacular plays of colors. The audio guide informed us about all the details the creator of Sagrada Familia had put in, nothing there is arbitrary, everything has a meaning. I, who believes to see a higher power in nature, was especially fond of the pillars that were formed as trees, making one feel as if wandering in a peaceful forest. The choir gallery goes along the entire church and has space for 1000 singers. One thousand! Michelle, Malin and I decided that we would return here once the church is finished and listen to a concert. 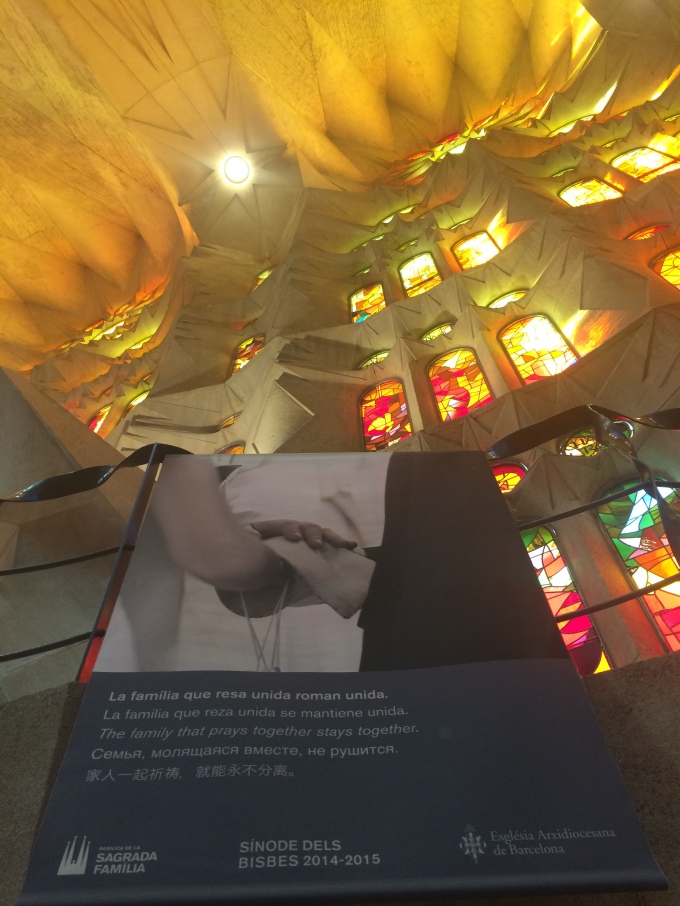 Being a Catholic church, of course there were some peculiarties, such as this poster stating “The family that prays together, stays together”.

Do you see the word “Deus”?

When I was in high school, I studied Spanish for two years and it surprised me how much I still understand. However, Barcelona is not Spain, a fact that I learned very clearly when there. Every other house flies the Catalonian flag. All signage is first in Catalan, then in Spanish and then in English. Catalan seems to be a mix of Spanish, French and Portuguese and sometimes we could figure out the meaning but not always. When we didn’t understand, we gladly made up information ourselves. At the beach, for example, Malin free-associated all the facts on the plate explaining the history of the beach. 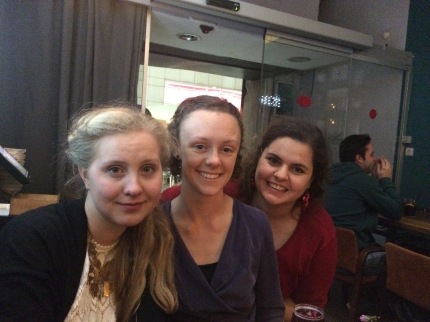 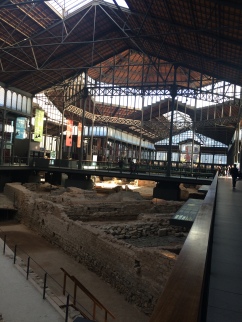 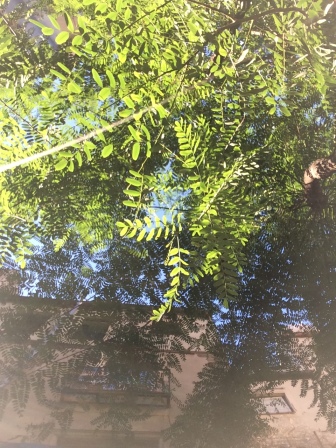 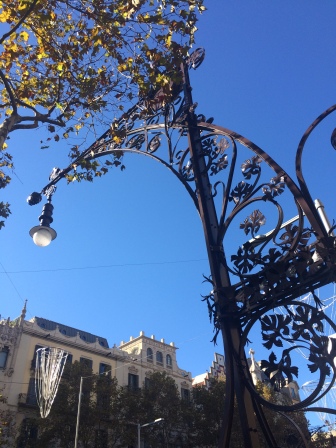 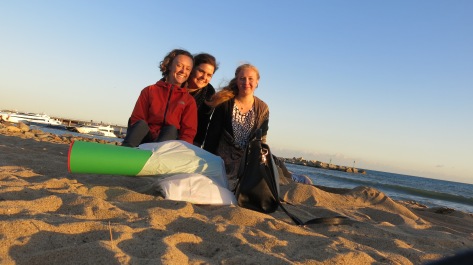 At first, it is a little annoying to be in Spain and not be in Spain. But then, Michelle took us to the Cultural Center of El Born where we learned about the history of Catalonia. In 1714, Barcelona was conquered by the Spanish. In the War of Spanish succession, Catalonia had sided with the Austrians, British and Dutch, trying to prevent the Philip, the Duke of Anjou, to ascend both the Spanish and French throne. According to the Cultural Center, the allies then abandoned Catalonia and decided to make peace with France and Spain. Barcelona was put under siege and made Spanish. My historian heart was delighted to learn all this and I kind of understand that the Catalonians are unwilling to be Spanish given the oppression that they have suffered more than once. (They also were subjugated during the Franco dictatorship.)

I ended my trip on a plaza nearby Michelle’s house: we ate fruit that we had bought (Spanish fruit is tastier than the imported goods we have), sat in the sun with lots of other good-humored relaxed people and listened to a street band. That’s the perfect picture of how I’ve always imagined Spain since first learning the word plaza in my high school textbook.

Gallery of weird things I saw (the G-rated part)