My Tweets
Posted on October 5, 2017 Uncategorized

“Did you grow?” “Has your voice gotten higher?” “You’re like a totally different person?!”

Those were the things my friend Hanna uttered yesterday when she came to Düsseldorf to see me after more than five years. We met when studying in Bremen and instantly connected over the fact that people mispronounced our names (calling her Hanner and me Helln). Then, I moved to Sweden and she moved to Korea. Yesterday, she came all the way to see me: after a 20+ hour-journey, she got on a train through half of Germany to see me for one night. That’s what I call friendship committment! 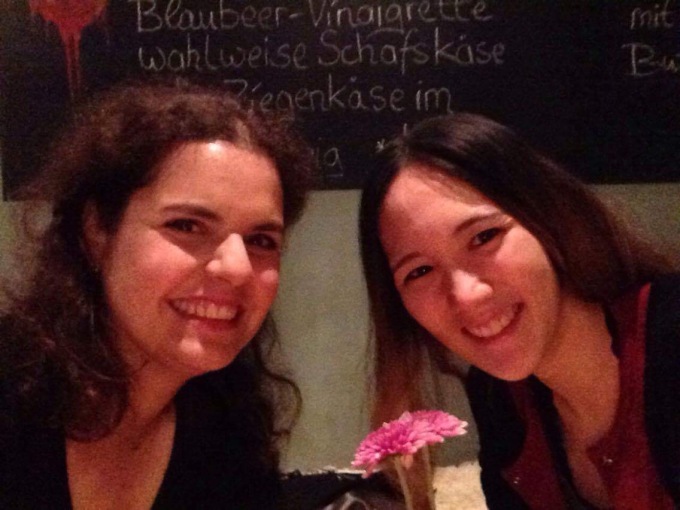 We went to Gill’s, the bar where I am kind of a regular (let’s say he still recognizes me though it’s been a while)

She experienced what Ingrid calls a dizzelpointment: After a few minutes in downtown, she asked me, “Shouldn’t Düsseldorf be, ehm, like prettier?” We all wish that but instead of taking her to nice tourist spots, I took her home and served her German Abendbrot, something that only an expat German like Hanna can fully appreciate. It’s difficult to catch up on 5 years in a few hours, but we did our best and had a wonderful night. When she had to leave at 7 a.m. this morning, I was so sad to already see her go. But I myself had to get going too because today I spent in Frankfurt, hosting one of my four biggest annual events.

This also happened this week: my extra co-worker got a hairdresser to come during lunch hours and she cut half of the office’s hair, including mine.

P.S.: It is Nobel Week! As a Nobel nerd, I loved when someone at my event asked during lunch if the laureate for literature had been announced. And what an announcement: ever since I read “The Remains of the Day” in class 12 years ago, I’ve said that it won’t take too long until Kazuo Ishiguro will be awarded the Nobel Prize. I won my bet today – and I still know the first sentence of that novel by heart.

One thought on “Hanner!”