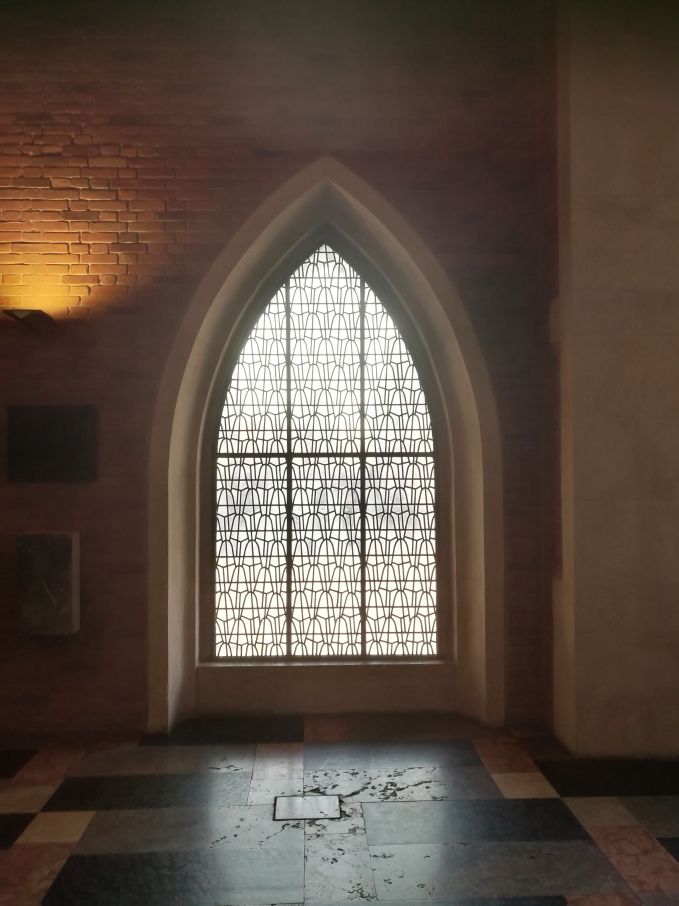 Sometimes it takes the threat of “you can’t do this as easily anymore soon” to get me to finally do stuff I have been planning for a while. When I realized on my birthday that I had a completely free weekend ahead, I decided now is the time to go and visit my friend Julia in Münster.

When I say “planning for a while” in this case, it means for 10 years. My friends Julia and Maike studied in Münster and in all these years, I never made it there. It’s kind of embarassing. But on Sunday, I decided that no laundry and no paperwork was worth postponing the trip any longer. Luckily, Julia was spontaneous too. From Düsseldorf, Münster is a mere 1:20 hours on the direct train. From Hamburg, it will be 2:20 hours (see above “not as easily”). The trip felt like a real little vacation, starting on the train. I sat next to a Luxembourgian lady and her French friend who presumed everyone around them spoke French, too. On my other side were two Persians and after eavesdropping for a while (not that I understand anything), I asked them if they spoke Farsi which struck up a very friendly conversation with them.
Julia picked me up from this international train and we walked to her new apartment. After months of desperate apartment hunting, she secured a very lovely place. Since I had lit a candle each Sunday in mass for her apartment search (yeah, I’m Catholic like that), I felt it was especially interesting to see the result. There, the first great thing with Münster struck me: it’s walkable. They call Münster the Grande Dame of Westphalia, but it’s not so grand you can’t walk everywhere it seems. There is nothing wrong with busses, but it’s really nice to be able to just stroll whereever you need to go. 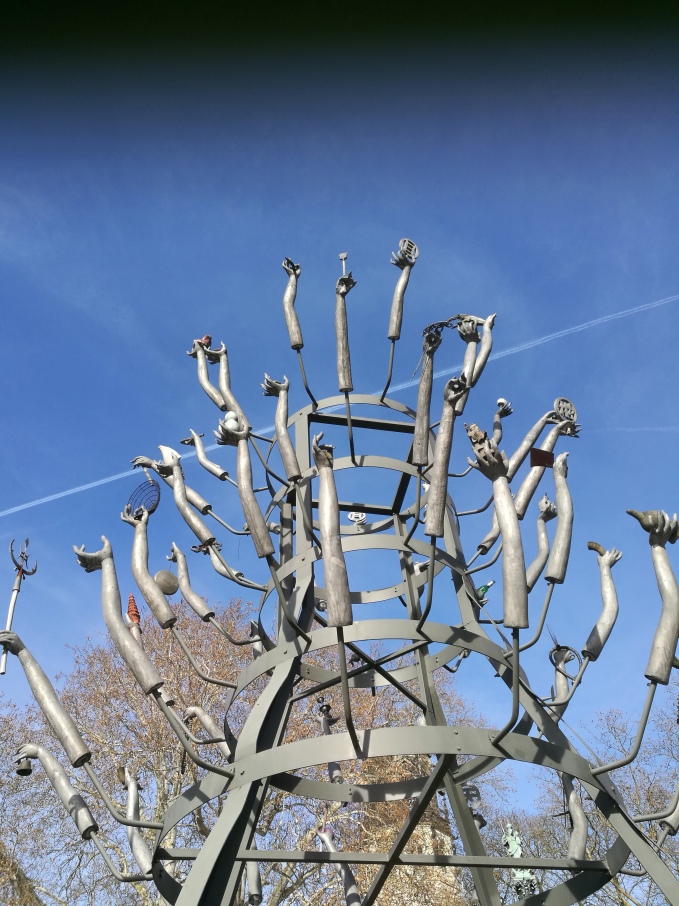 “The best for the youth”, this inscription reads. There used to be a store for toys. 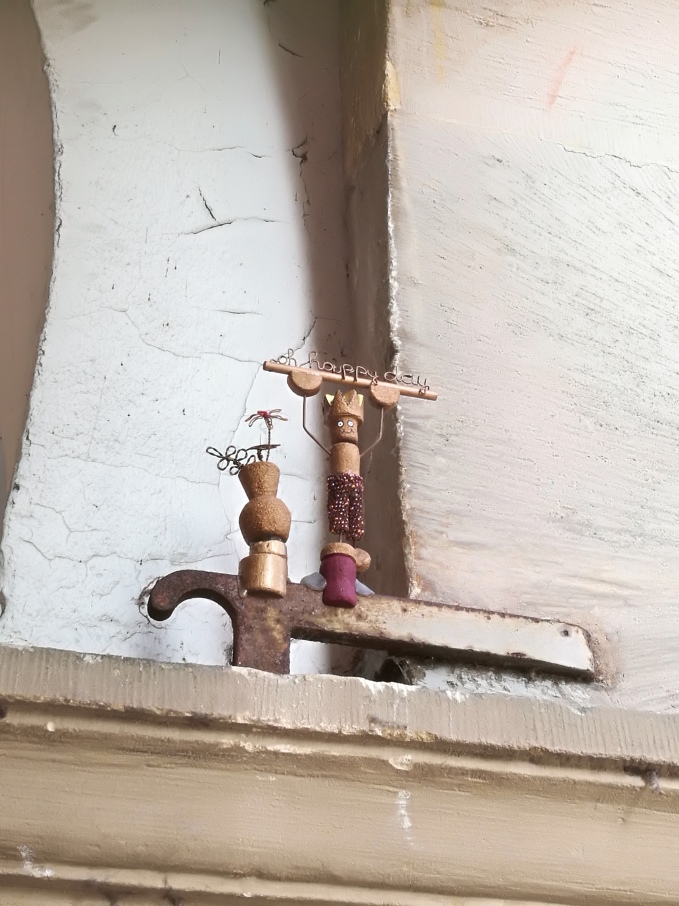 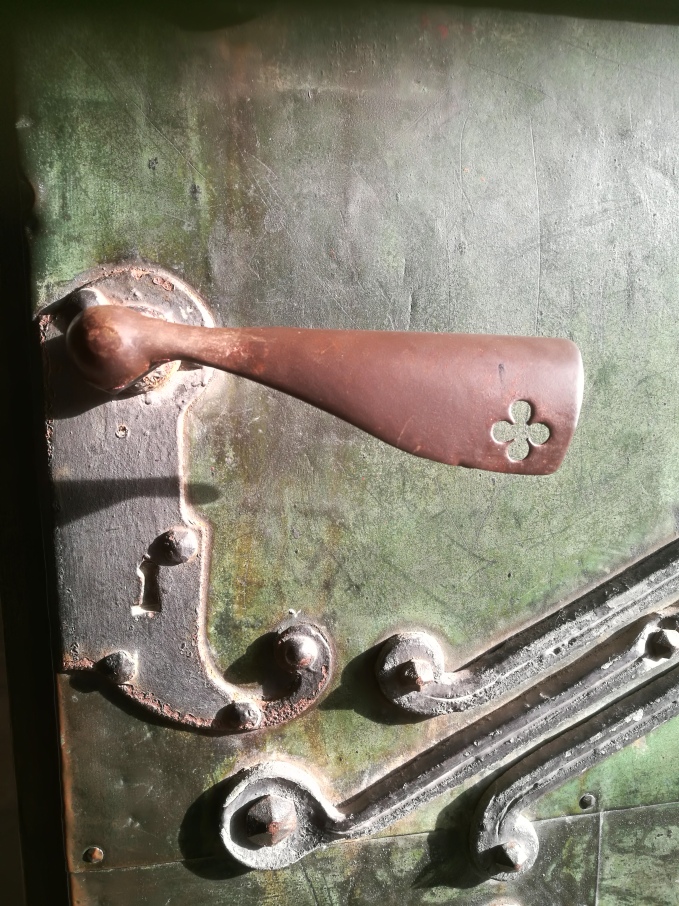 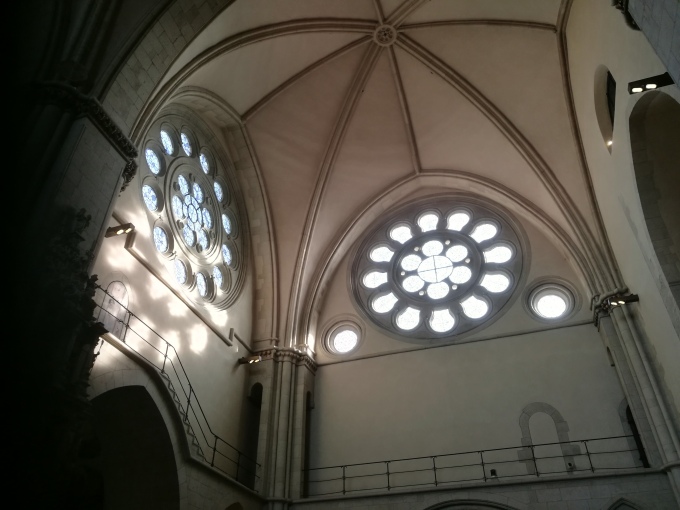 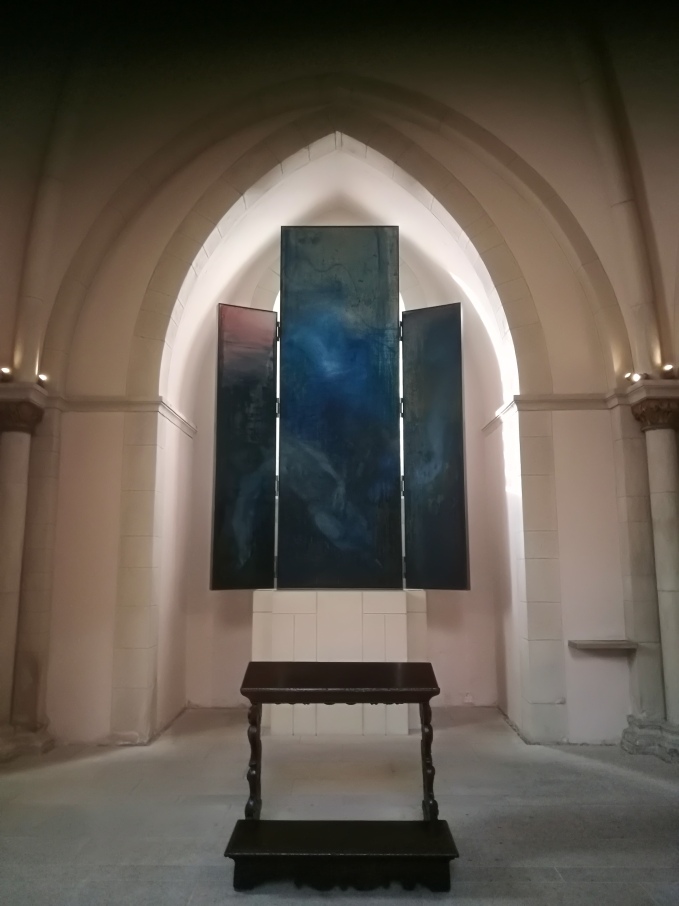 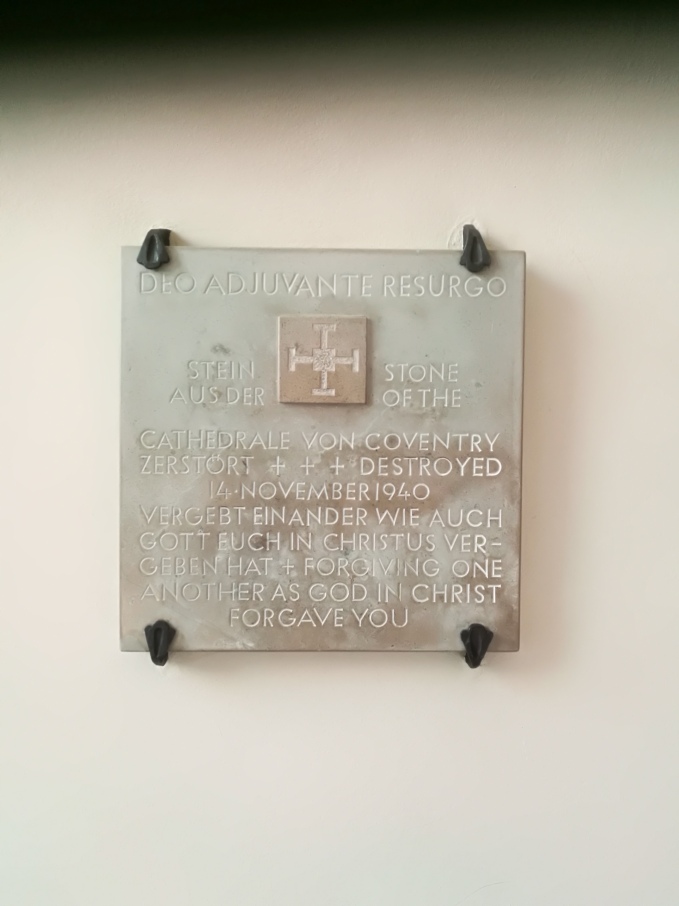 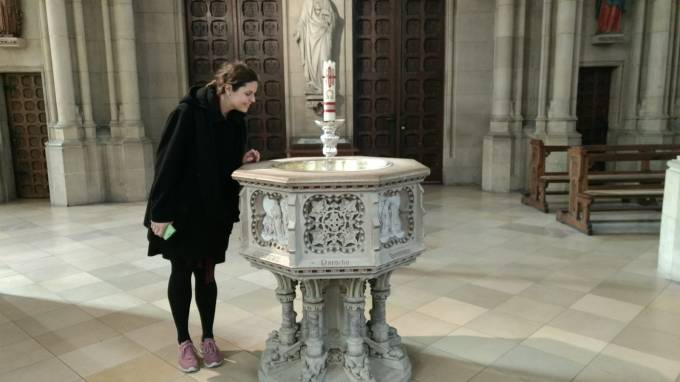 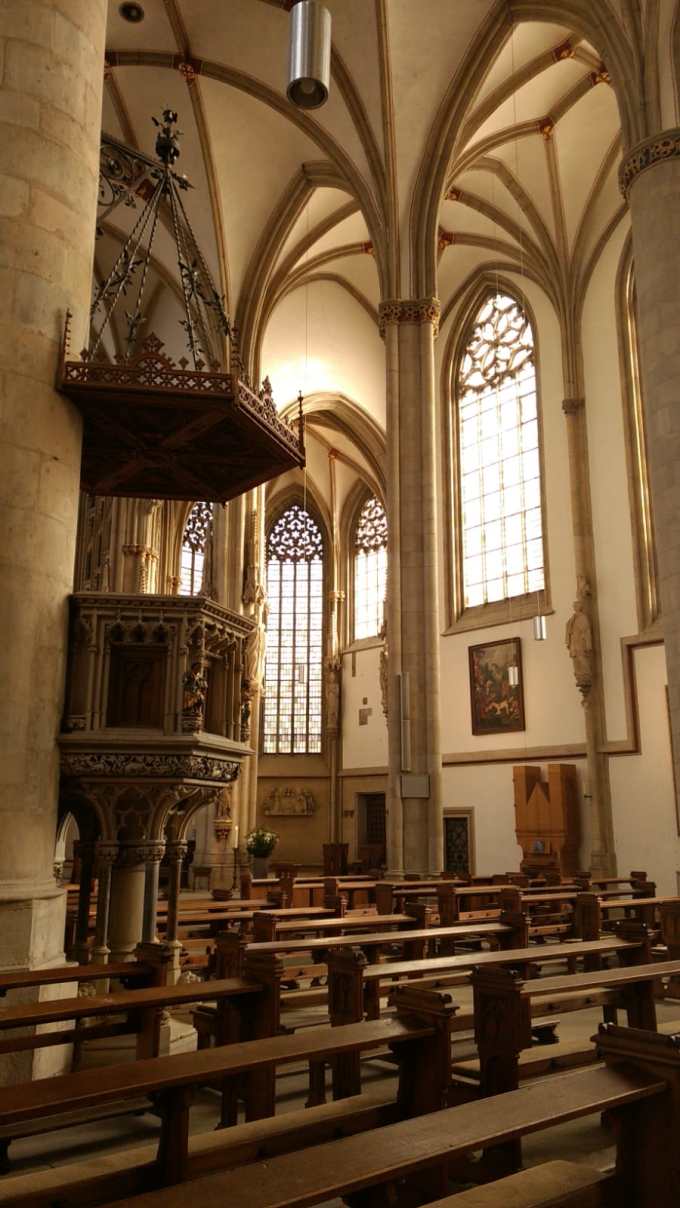 Which in our case was the inner city. I suppose if a city is called “Monastery” (Münster in German), you can guess it has strong Catholic influence. But I wasn’t prepared for just how many churches there are. I counted over 50 Catholic churches alone. There’s basically no spot in town where you can look up and not see a church tower. There are churches that have cages hanging from them in which they put the non-believers in the Middle Ages. There are churches with organs that seem to float. And the Cathedral’s entrance is called “Paradise Portal”. Occasionally a priest, all capped and gowned, walks by (or was it the Bishop?). Nuns on bikes pass you. Speaking of bikes, Münster is known nationwide for it’s bike-friendliness. When I accidentally stepped on the bike lane, Julia pulled me aside. “Only non-Münster-residents make that mistake”, she informed me. There is even a bike autobahn for cyclists. 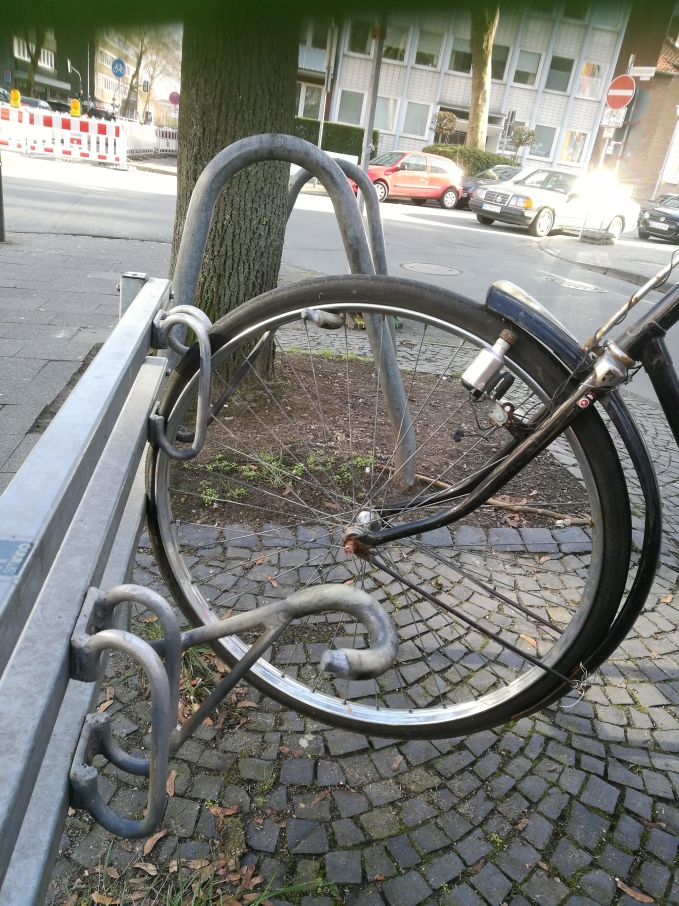 But apart from his bike fame, Münster is most known for peace. (Or at least I really hope most people know.) After 30 years of bloody war on the European continent that took 8 million lives, it was in Münster (and Osnabrück) the Peace of Westphalia was signed in 1648. The reason for having two cities was that the Catholics negotiated in Münster while the Protestants came to Osnabrück, a bidenominational town.
It’s hard to grasp the magnitude of this treaty, but just imagine if everyone is at war with everyone forever and then suddenly they aren’t. The relief! And here I was, getting to step into the very room at Münster Town Hall, looking at the original decor that also Axel Oxenstierna viewed when signing for Sweden that the long war was over. That’s quite something for a regular Sunday afternoon.
In that room they also displayed some artefacts, among them the Golden Chicken. It’s tied to a legend from the Thirty Years War Period but the most interesting part for me was that the chicken is actually a goblet (if you remove the head). A whole bottle of wine can be poured into the chicken. Important people who come to Münster and sign the Golden Guestbook of the city get to drink from the chicken. I believe I just found a new item for my life’s bucket list. 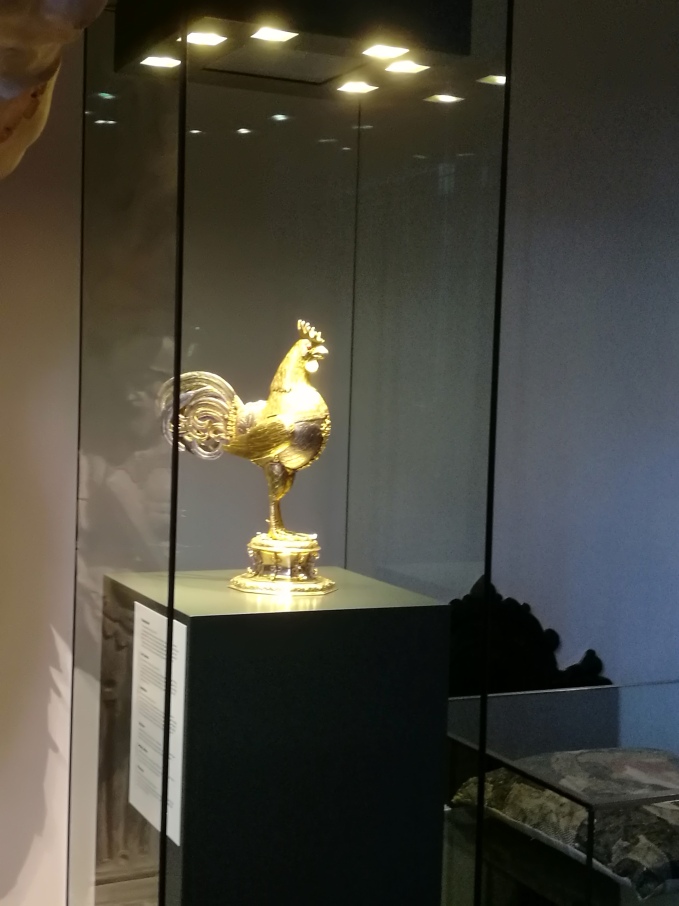 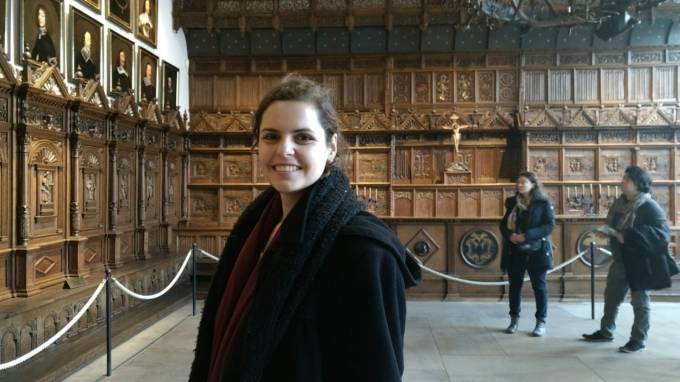 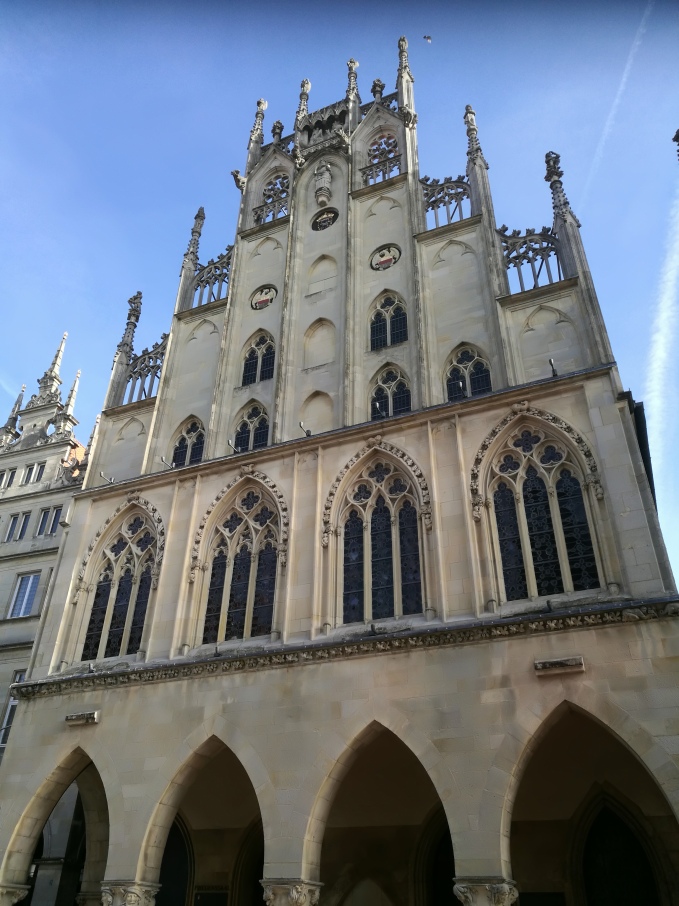 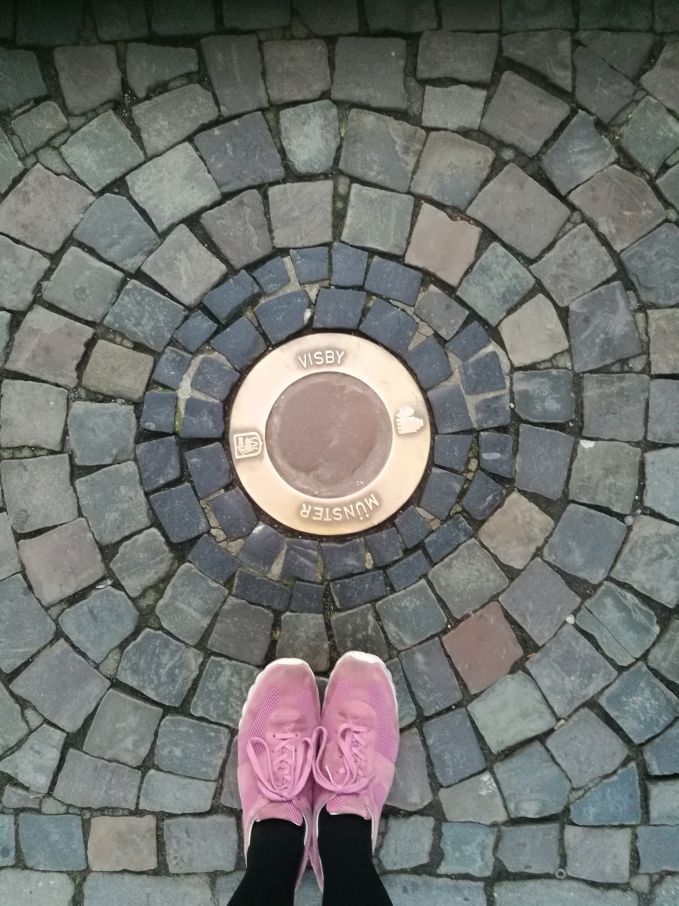 Visby is the partner city of Münster!

We continued our walk through town to a burger restaurant. Münster is so pretty and polished. I wonder where all the money comes from but they sure show it in their house facades. The cobble stones and the spring sunlight gave the city an atmosphere that is irresistable – combine that with the young and promising students everywhere and you just want to keep coming back. The burger place was really cool – instead of a seat, I got to sit on a swing. The waitress asked us “Would you like your burger with meat?” instead of the much more common exchange, “Do you have a vegetarian alternative?” Every burger was offered as vegan, too. 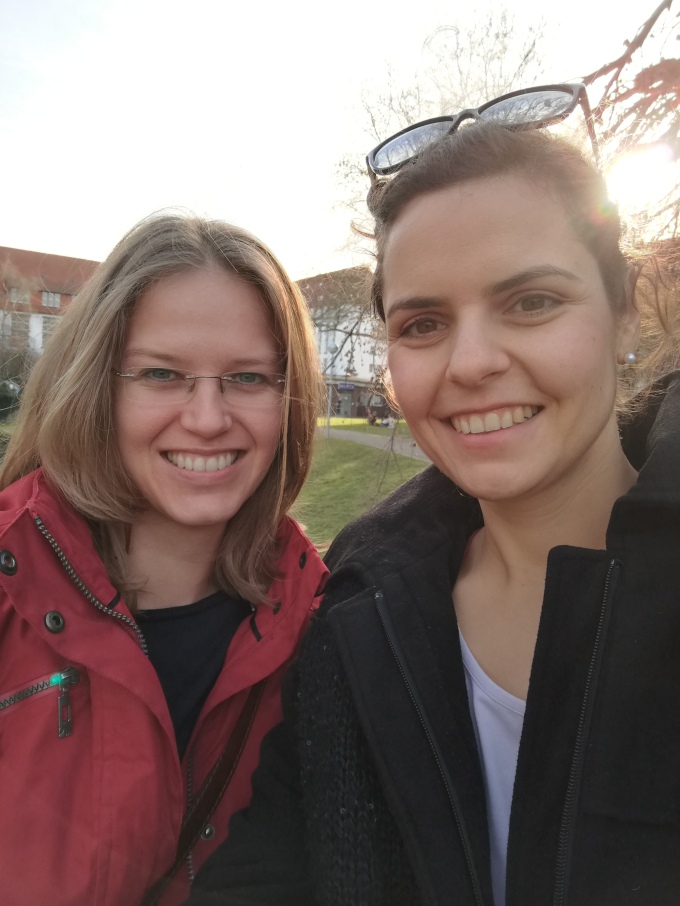 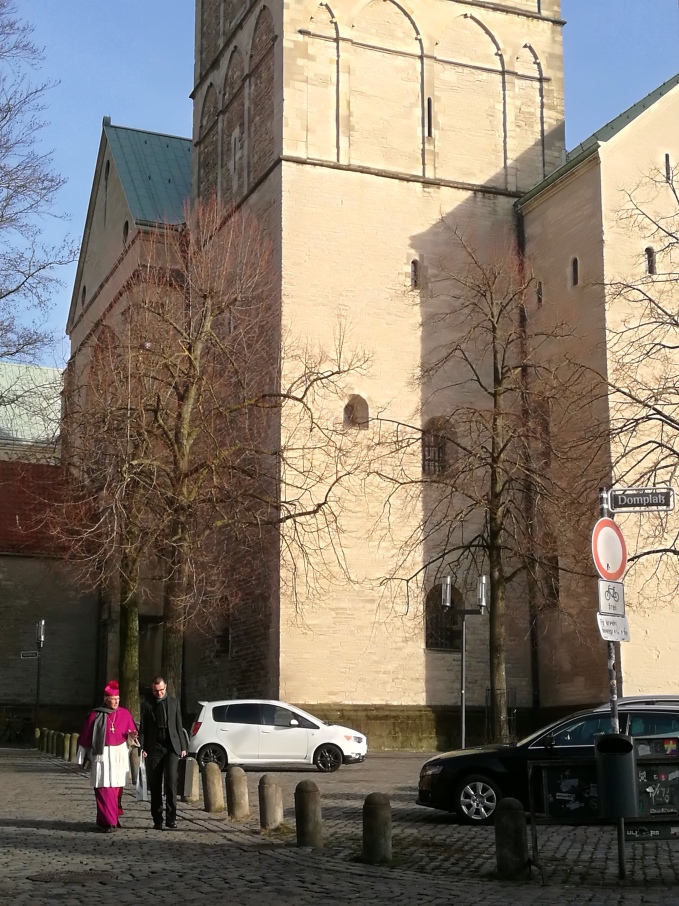 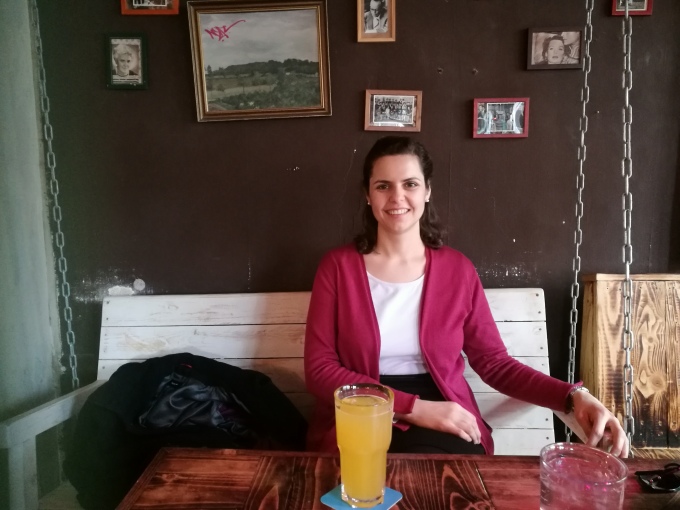 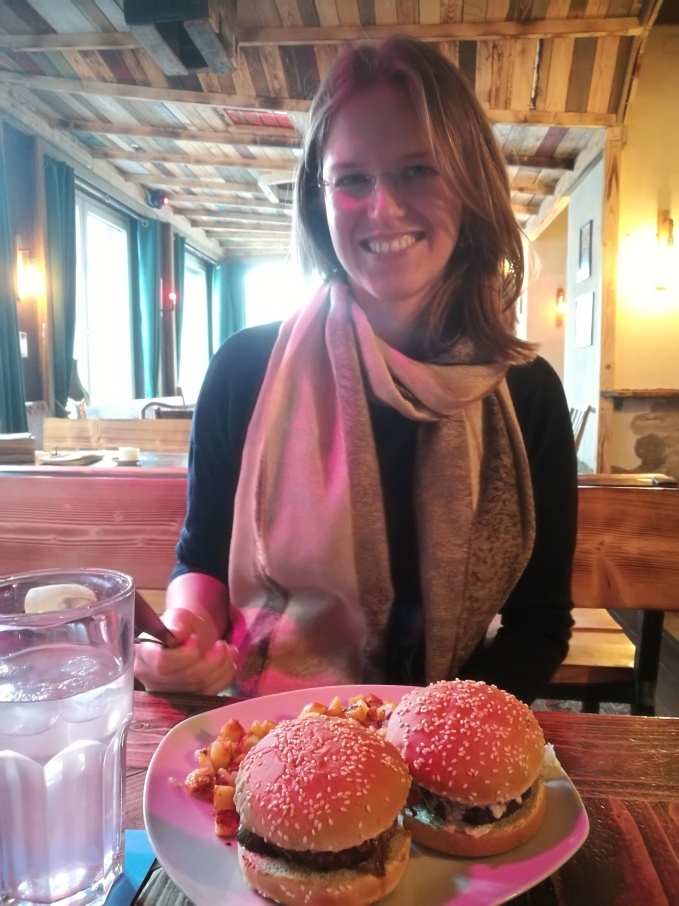 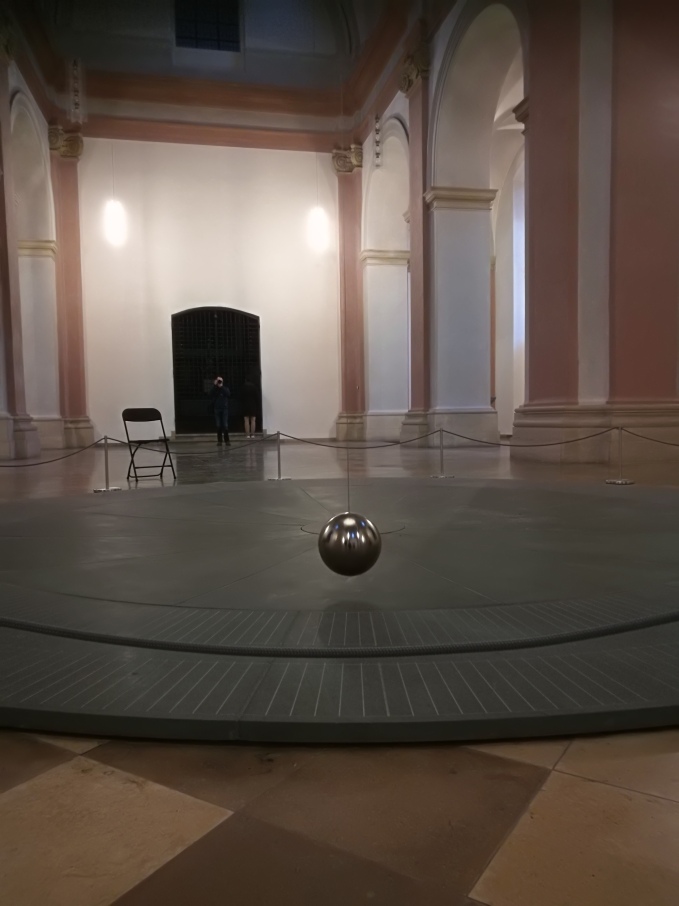 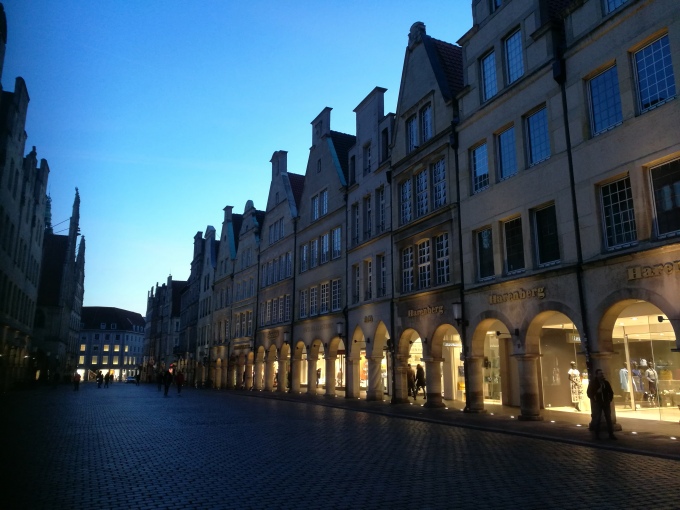 Before I had to leave again, we took the opportunity to see an installation by famous German artist Gerhard Richter. One of the many churches had been profaned and now serves as a unique space for art. There, Richter has put up a 48-kg-pendulum 29-metre-long cable. It is a Foucault pendulum and despite reading the info sheet, I still haven’t understood 100 % how it works. I do see the many levels on which you can view this artwork, though. Foucault’s pendulum was the experiment that proved the earth was moving, something the church denied for a long time. When you sit there, following the pendulum swing eternally, you almost must fall into meditation about the course of time. On both sides of the pendulum, grey giant double mirrors are put up that reflect the pendulum, the visitor and essentially each other. The reflection goes on into eternity like that. Perpetual movement.
I left Münster with a promise to Julia to come back much earlier than 2029. I still have to see the Aa Lake!