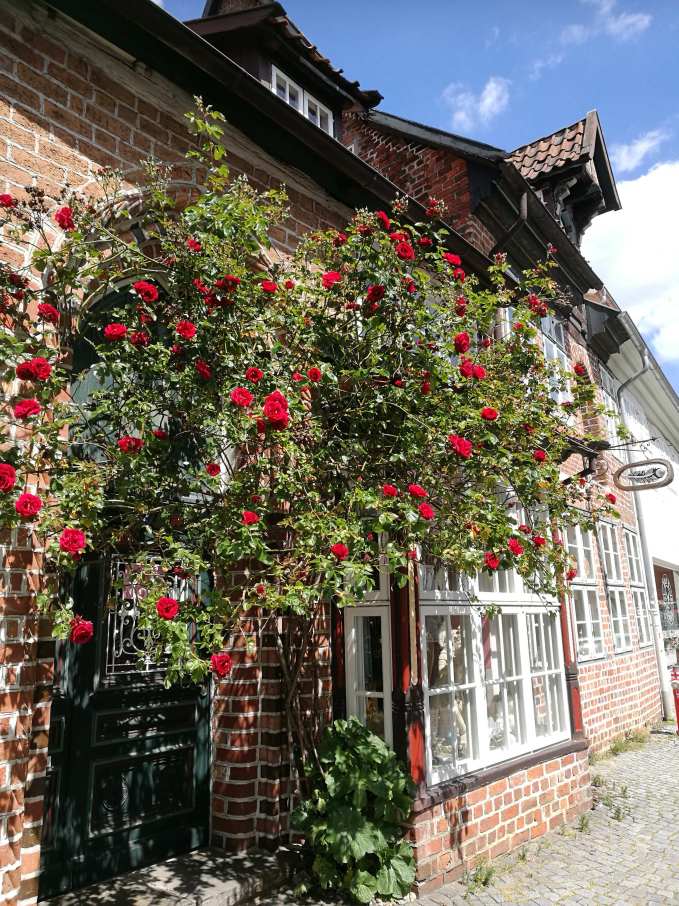 Man, I’m beat! A day of sunshine, more than 10,000 steps and lots of impressions is behind me. We used the holiday for a day trip which felt like a small city break vacation. It was such a nice day. The Corona regulations have been lifted a little so we could enter Lower Saxony and go to…Lüneburg! I’ve been wanting to go to this 73,000-people-town for years because it is close to Hamburg and anyone will tell you, “Lüneburg? It’s beautiful! You have to go!”

And what can I say? Lüneburg did not disappoint. I constantly had to get out my phone to take more picture because every corner of the Old Town is so picturesque. The only sad part was that Lüneburg’s tourist info homepage stated there would be a guided tour at 2 p.m. and when we got there, we found a notice saying there are no tours until May 25 due to Corona. I mean, that’s understandable but why would you not update your homepage (if you bothered to update that “tourists are allowed back into the city”?) Oh well! Google came to the rescue and we guided ourselves around the town.

Lüneburg Chamber of Commerce has a real nice house 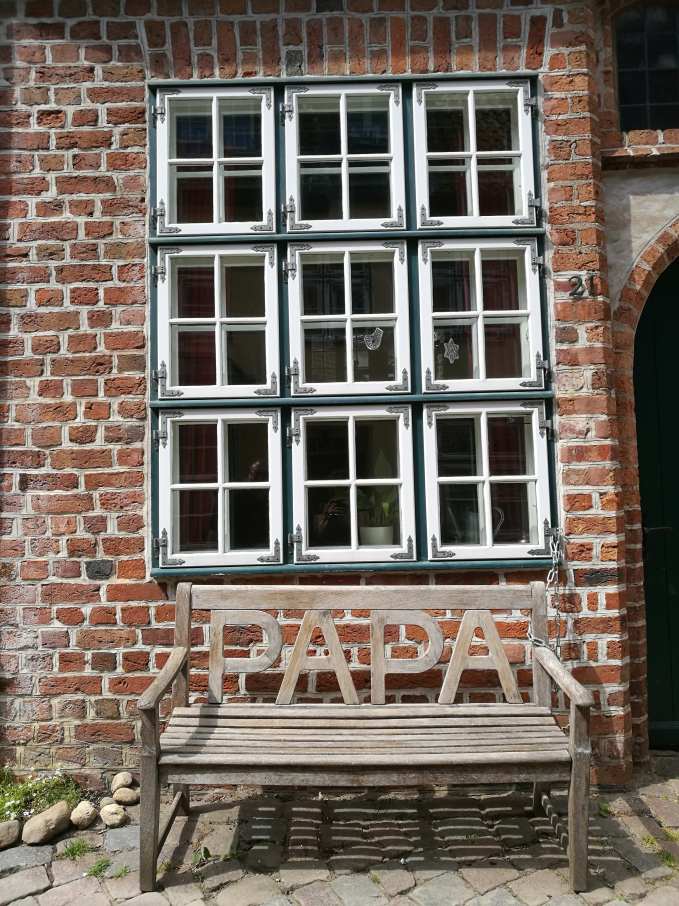 It was Father’s Day today. Lüneburg has the bench for it.

The city of pretty doors! 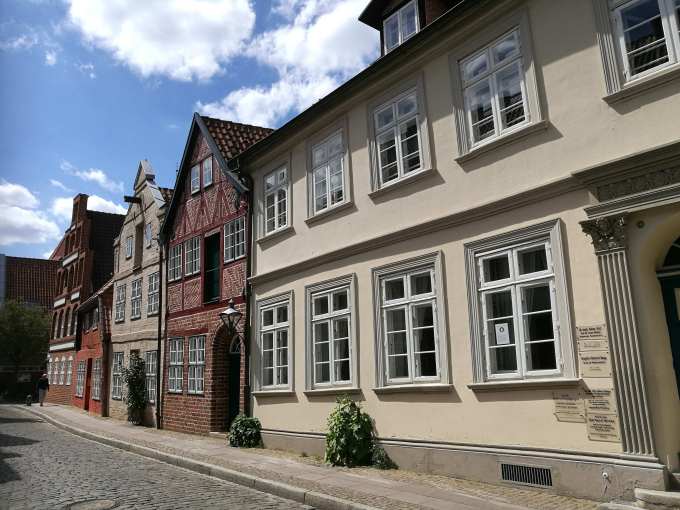 This house is lopsided, can you see? 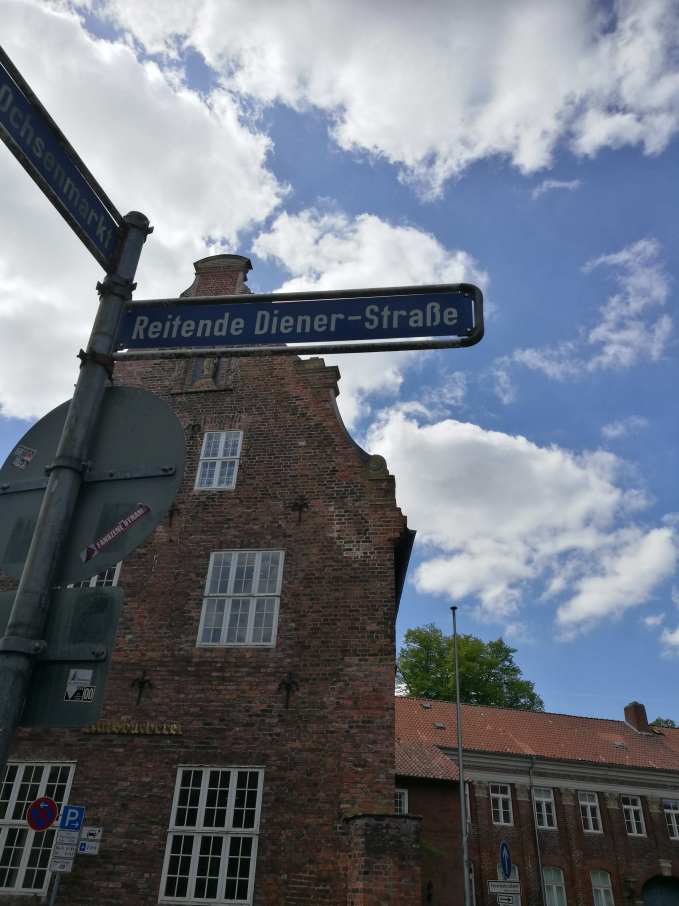 Lüneburg has the best street names, this is one “Mounted Servants Street”

Someone is very pleased with his ice cream 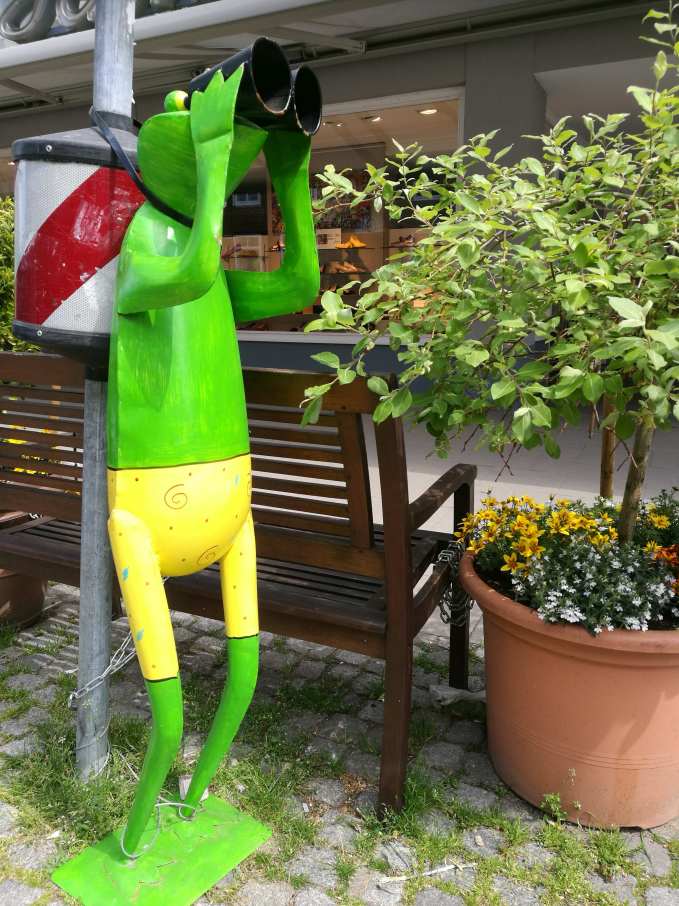 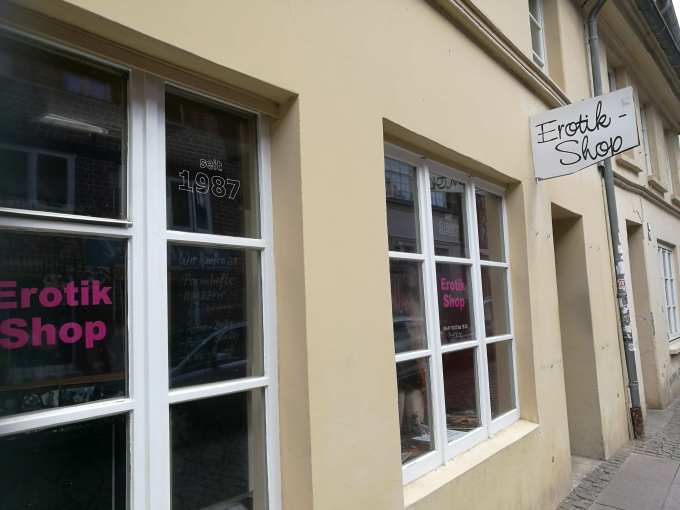 It really struck me how very many shops were not chains but individually owned stores. Even the sex shop.

Many sights were closed but luckily the German Salt Museum was not. Why is there a Salt Museum, you wonder? Because Lüneburg was Salt City! Salt is the “white gold” that made Lüneburg rich (as you still can see when you look at the beautiful houses) in the Middle Ages. It was the salt town of the North, exporting to Scandinavia and all of Germany. For more than 1000 years, Lüneburgers worked in the salt mines before it was closed down in the 1980s. The salt mine never closed except for one day a year, Good Friday. Imagine that – what other business has been up and running for a millenium?! The museum was very interesting, especially for someone like me who did not pay enough attention in chemistry. There are also so many customs and ideas around salt, just think of the Bible (“Salt of the Earth”) or how Germans give salt and bread as a housewarming gift. I mean, it makes sense: no salt, no life. We also learned the legend of how Lüneburg inhabitants found out they had a salina: Hunters observed a wild sow that was white. They brought it down and checked its skin to find out why it was white: there was salt on its body and close to where they found the animal was the first saline pool discovered. 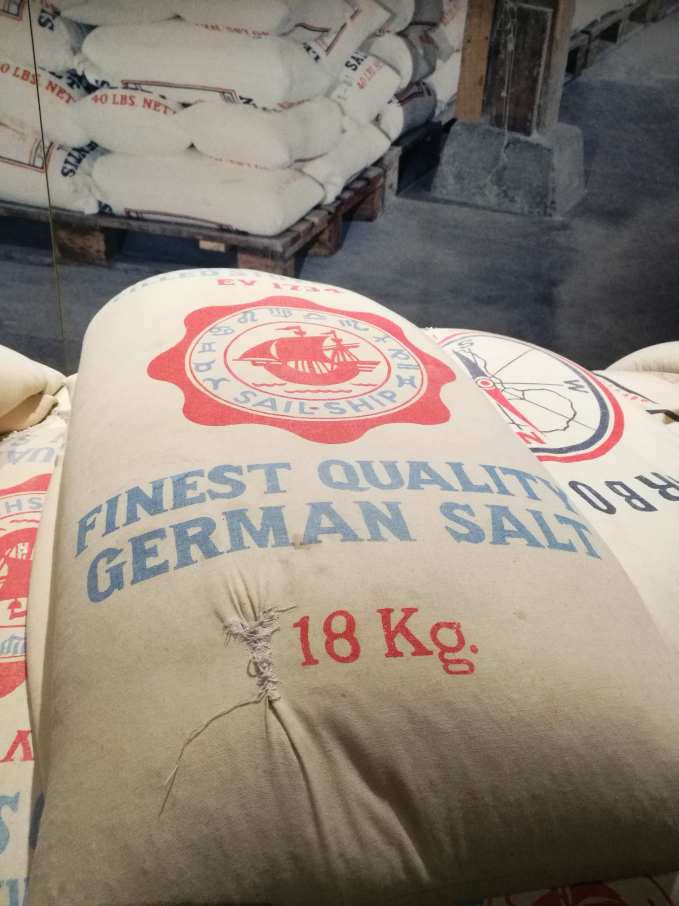 Did you know there is no language that doesn’t have a word for salt? 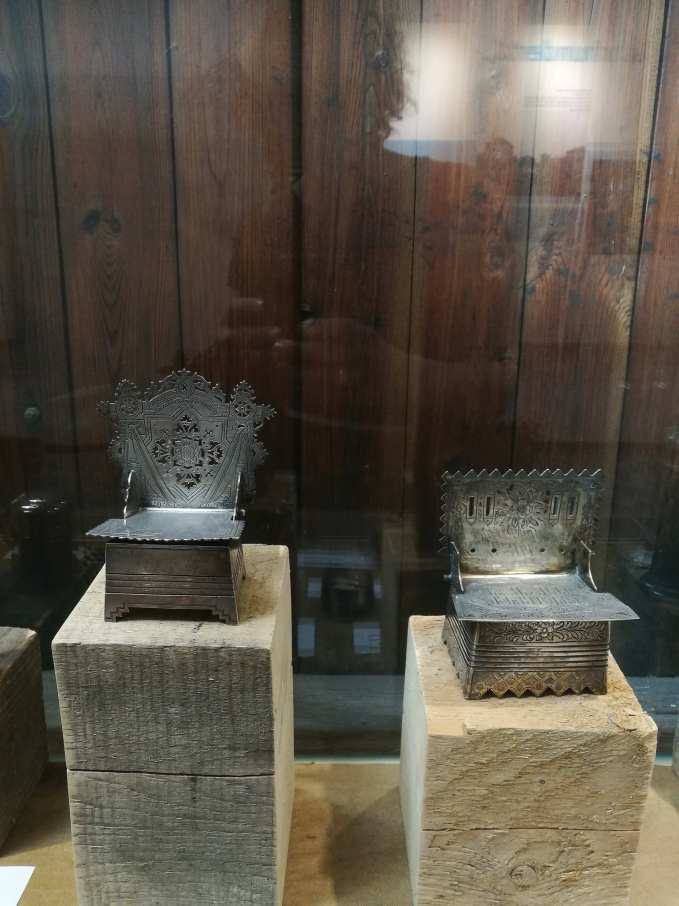 The salt shaker exhibition room was one of particular delight to me: Russian salt shakers are thrones, as you see here.

Before we left lovely Lüneburg in the evening, we took a little detour to the university campus. My friend Ingrid spent one semester studying in Lüneburg and when I told her we were going there, she suggested we take a look at the newly built central building of the Leuphana University. (This fancy name was adopted only 13 years ago and stems from a small village mentioned in a map from the second century A.D.. Seems though like that village is not today’s Lüneburg, but rather the less famous town of Hitzacker. A renowed ad agency suggested that name…) Ingrid’s tip turned out to be really great: the architecture of that building is stunning! I couldn’t come up with any other university building (of modern times) that had such an extravagant edifice. No one less than Daniel Libeskind himself designed the Leuphana central building (where do they get the money from?! Salt doesn’t sell that well anymore?) 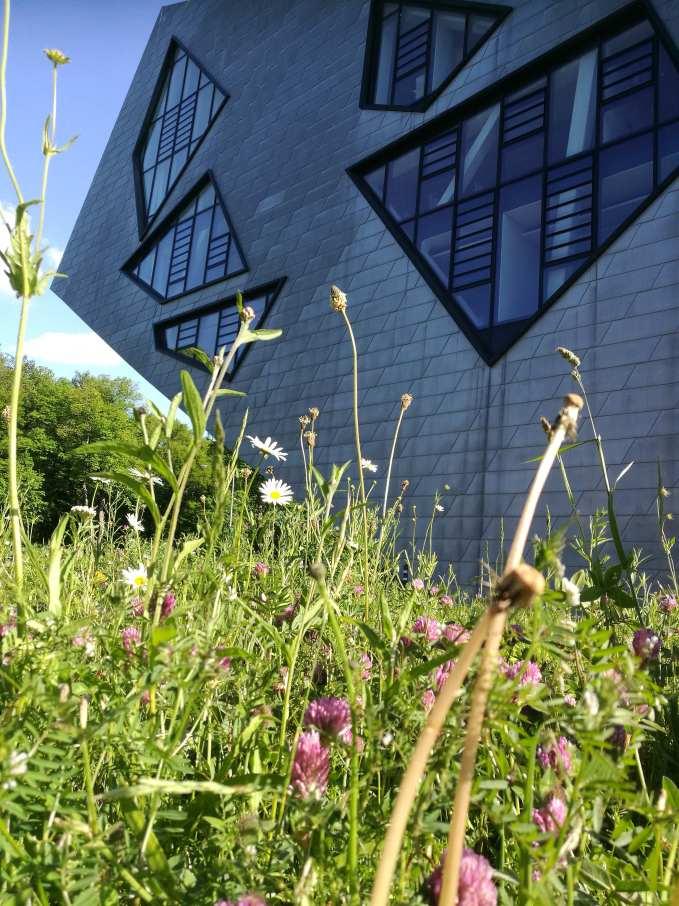 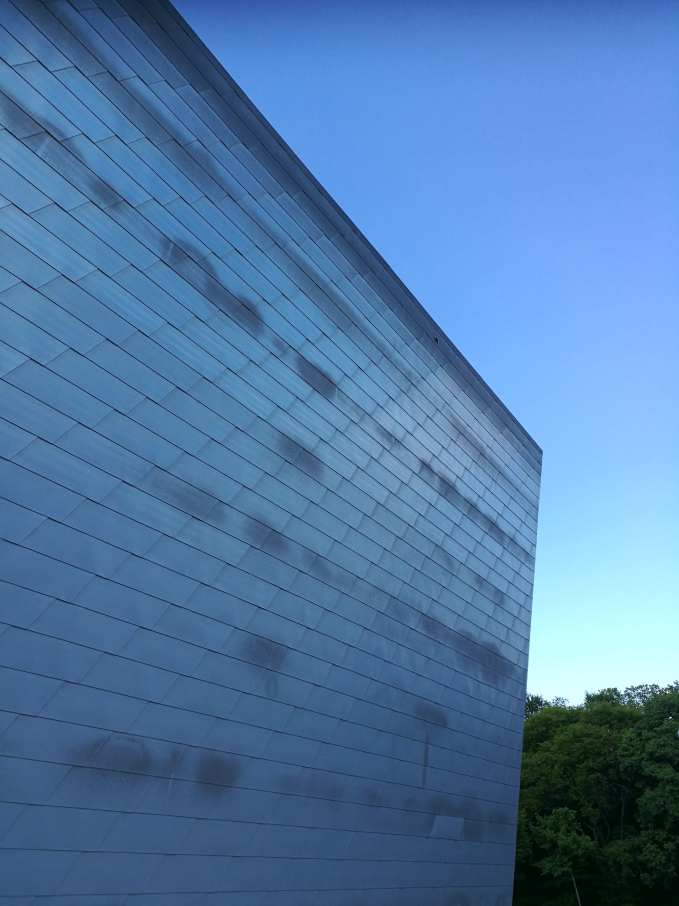 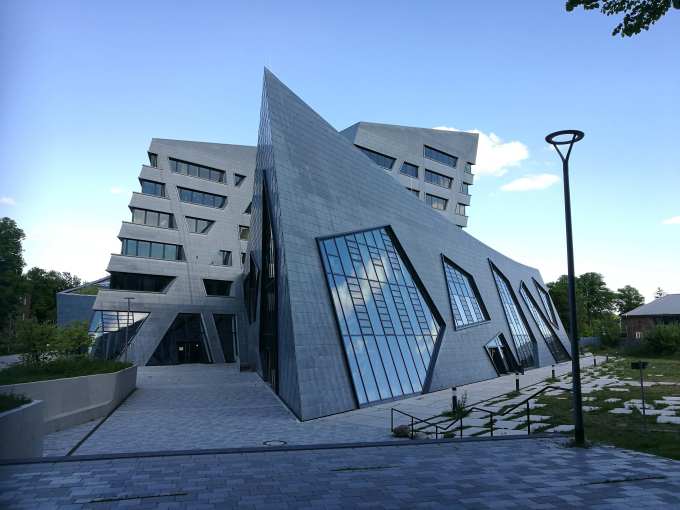 If you’re ever looking for a destination for a day out that’s both a feast for the eyes and historically super interesting – go to Lüneburg!

Is the week in your remote office long and dreary? I suggest you try putting guldkant on your day with this simple breakfast recipe. I found it a long time ago in my favorite Swedish (plus 30) women’s magazine and had somehow lost it in my recipe book then. When I, anticipating Easter, went through the recipe folder, I found it again and decided to try it. It’s thus Tested at the Tiny House – and approved.

Mix the bananas (it helps if they’re more on the brown than the green side) with the blueberries. Add cardamom, at least a teaspoon, but feel free to go for one and a half or even two. You would think cardamom is more an oriental spice, but like saffron, Swedes use it a lot in their sweet food. I still have to find out why this is. Add a pinch of salt to elevate the taste. Now sprinkle nuts on top, I use almonds, but hazelnuts work fine, too, I’m sure. The whole thing probably looks brownish, but trust me, it’s really nice. You can also just tell yourself it looks like chocolate. If you need more instagramability, try putting some other fruit on top, like I did. Now serve with a spoon (this is not a smoothie) and enjoy!

Posted on April 20, 2020April 19, 2020 Uncategorized
The best of both Germany and Sweden
Blog at WordPress.com.