“The river Rhine is flowing happily and waiting for you”, my choir friend from Hamburg wrote to me when I moved to Düsseldorf. Almost four years later, I finally appreciate this stream that Germans call “Father Rhine”. A and my very first trip was to Koblenz, where Rhine and Mosel meet, and I’ve been wanting to go to Königswinter for a long time, too. Both cities are made for Rhine Romantics – majestic mountains rising up behind the water, picturesque old towns with half-timbered houses and wine restaurants and the occasional ferry transporting tourists up and down the river. Simply “a poet’s dream”, as Heinrich von Kleist described the Rhine region.

Königswinter had two strong arguments for me: it is just an hour’s drive from home (more time to explore, less time to travel) and it has the Drachenfels mountain with a castle that is referred to as the Rhineland’s Neuschwanstein. Traffic slowed us down a little but we were immediately enchanted by this little town (that is actually not that little, I researched Königswinter has 30,000 inhabitants!). We started with strolling down the river promenade and having lunch. In the 1920s, this was a swanky resort to which not only Germans but also many British travelled. A little bit of that atmosphere is still reflected in some of the buildings. 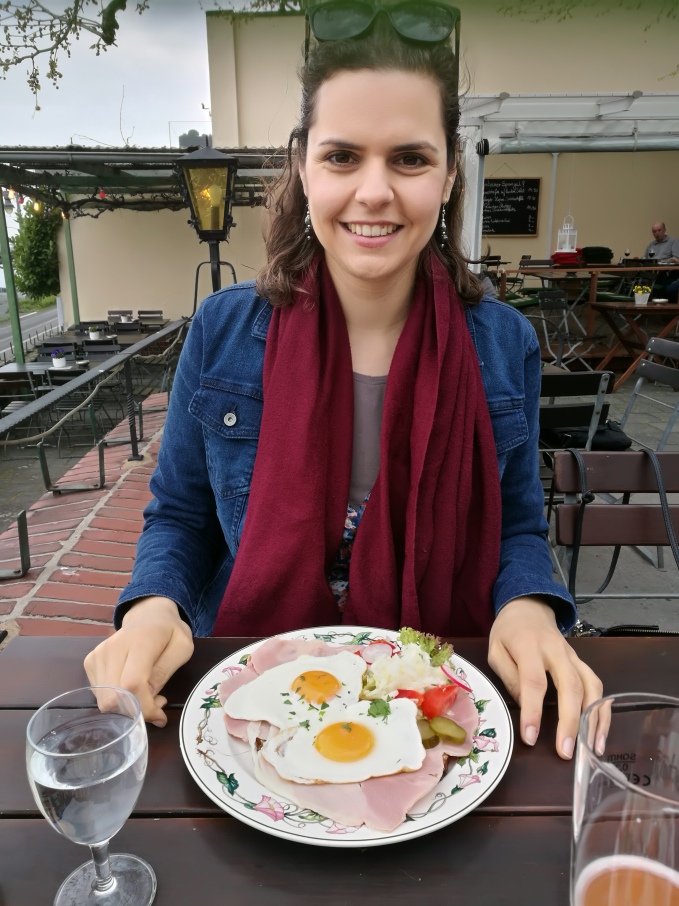 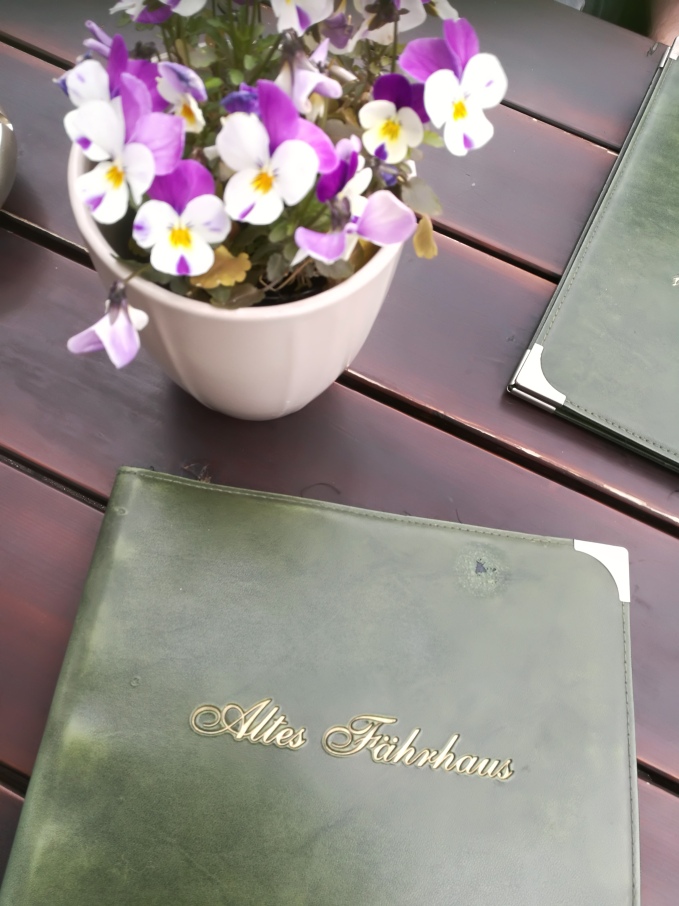 We looked through a nice interior store and as a Riverdale fan, I of course had to take a photo of this

A pub that didn’t look very inviting had this hilarious sign saying, “Small Party Corner International Music”. We passed the place four times, always peeking in to see if the party corner was in use.

I not only appreciate the Rhine now, I even appreciate Rhenish wisdom. One of my favorite sayings is “Jeder Jeck ist anders”, meaning “It takes all sorts to make a world”, and expressing a wonderful sense of tolerance 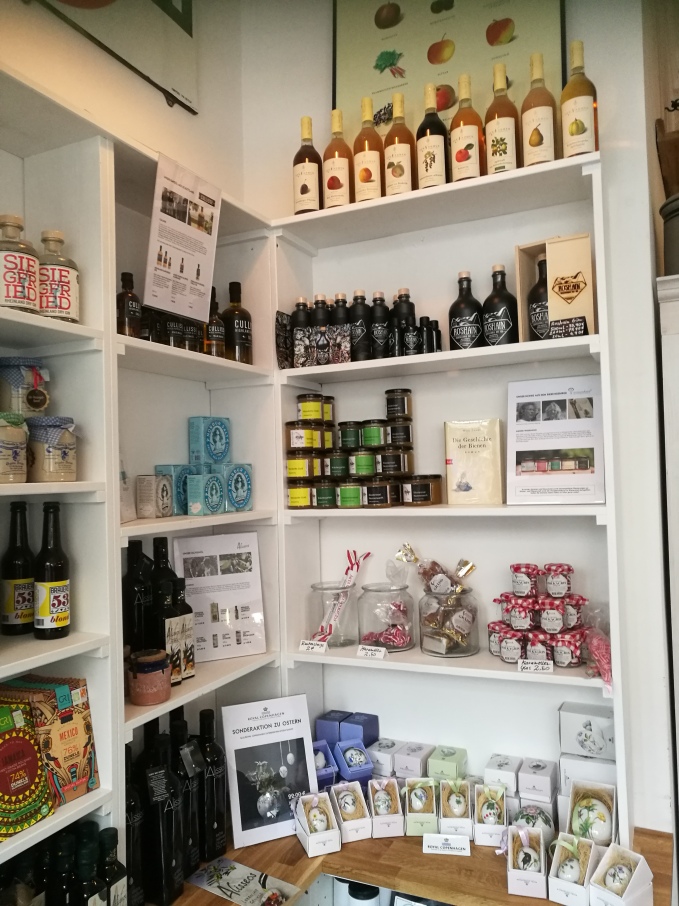 Königswinter has lots of pretty little cafés and stores 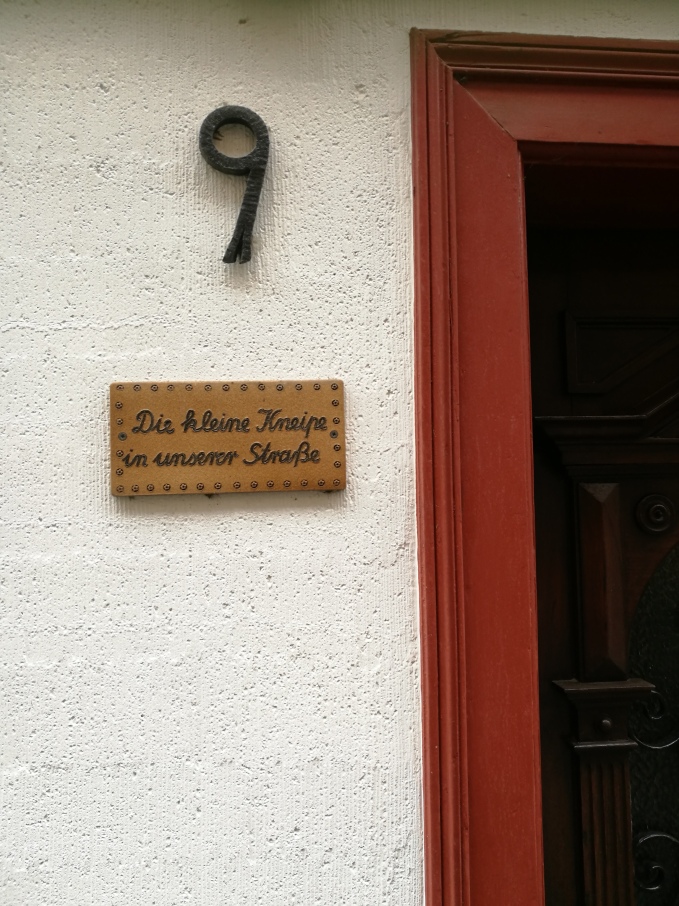 “This is the little pub in our street”

Always seeking knowledge, we followed the signs to the Siebengebirge Museum that recounts the history of the region. Such a modern, interesting museum! It even had augmented reality parts. We learned that

the mountains were used as a stone pit,

that Lord Byron made Königswinter famous with his poem about Drachenfels (and they dedicated a square to him a couple of hundreds years later),

that there is a Königswinterer oven, a special kind of oven that apparently was a huge innovation, and

that the donkies that used to transport stones from the mountains were repurposed as tourist attractions when the stone pit was discontinued. A called this donkey structual change.

A memory game of paintings and poems of the Rhine

This fellow sat down with a glas of wine telling us about the history of the Rhine. He almost felt real!

When walking around in Königswinter you also see a mountain top with a large building on it: Petersberg. The Petersberg is a very historcial site as the Allies signed an agreement, the Petersberg Agreement, in 1949, granted Germany extended rights and led the Federal Republic away from occupation towards sovereignity. Feel the breath of history! Even today, the Hotel Petersberg is an official guest house of the German state. Queen Elizabeth, Nelson Mandela and Queen Margarethe of Denmark have stayed there. 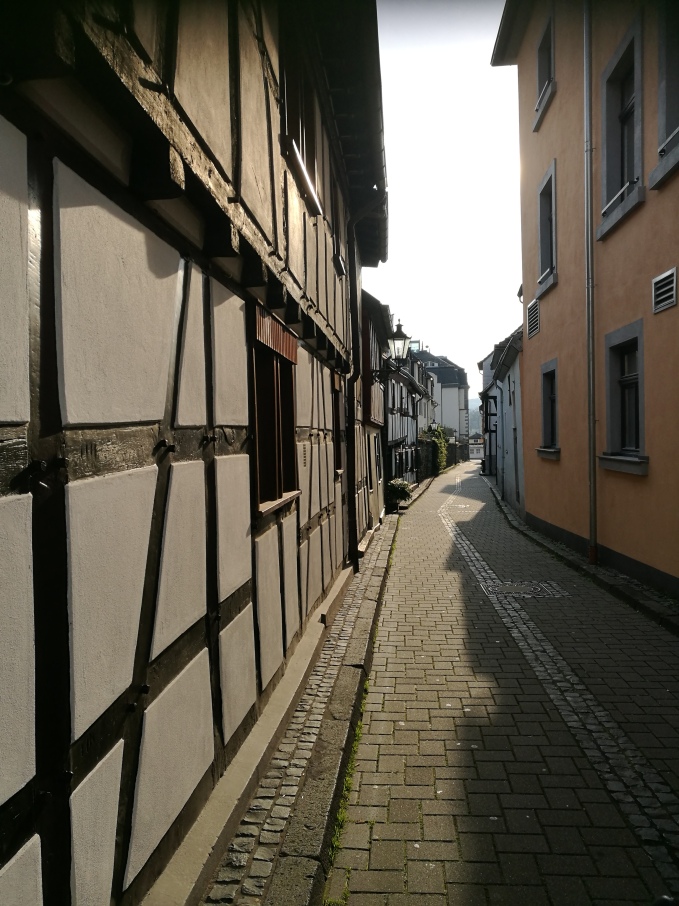 On Sunday, we went up the mythical mountain Drachenfels. It’s 321 meters high and we took the Zahnradbahn (rack railway), something that particularily excited A. It wasn’t any rack railway but the oldest still functioning one. From 1883! The mountain became a popular tourist destination thanks to the poems of aforementioned Lord Byron and German poets and legends surround the “Dragon’s Rock”. Its name stems from the most well known legend of The Nibelungs’ Song’s Siegfried who slayed a dragon here.

In 1883, a ridicuously wealthy banker came up with the idea to build a magnificent Disney castle halfway on the way to the mountain top. He never even lived there, he only had it to impress important friends that he received there. 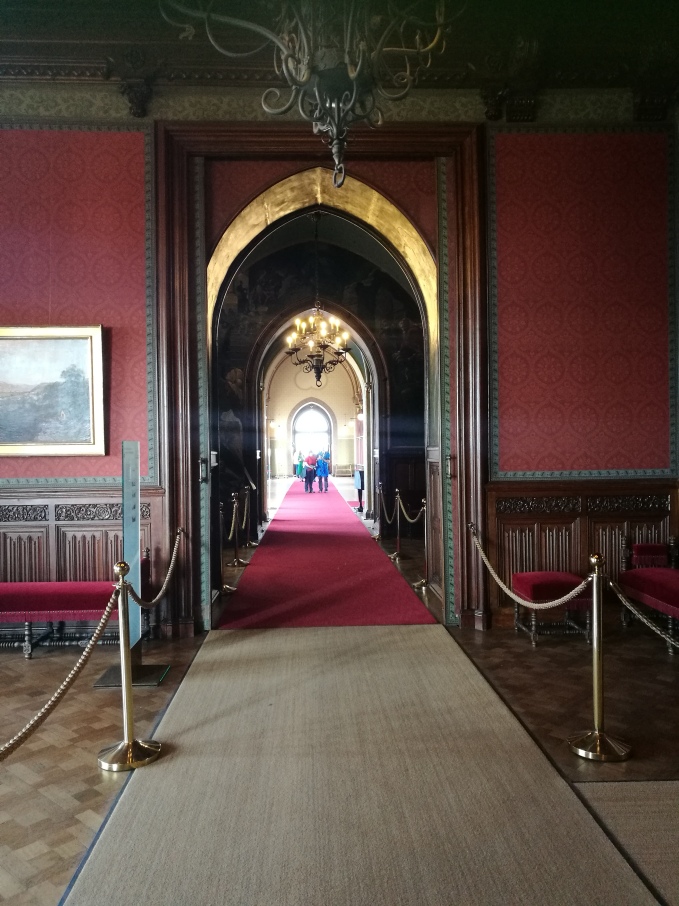 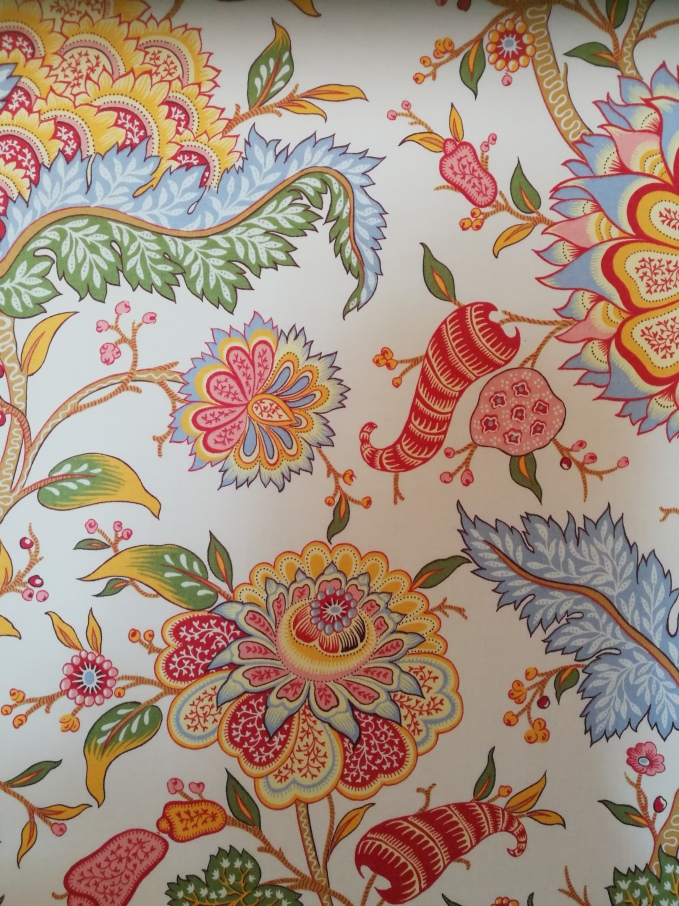 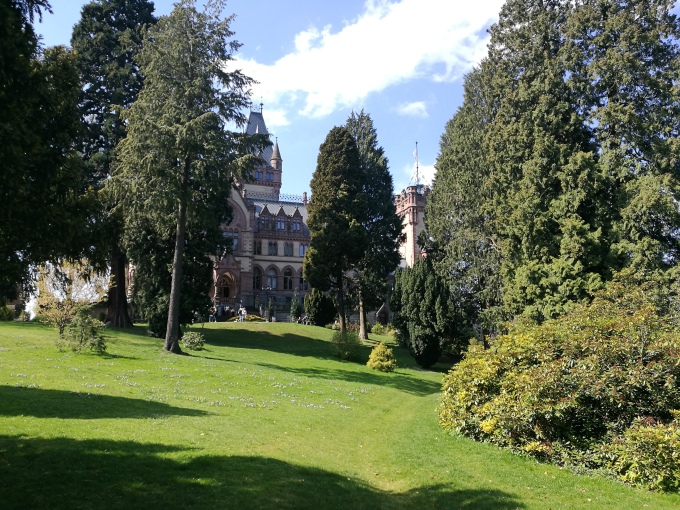 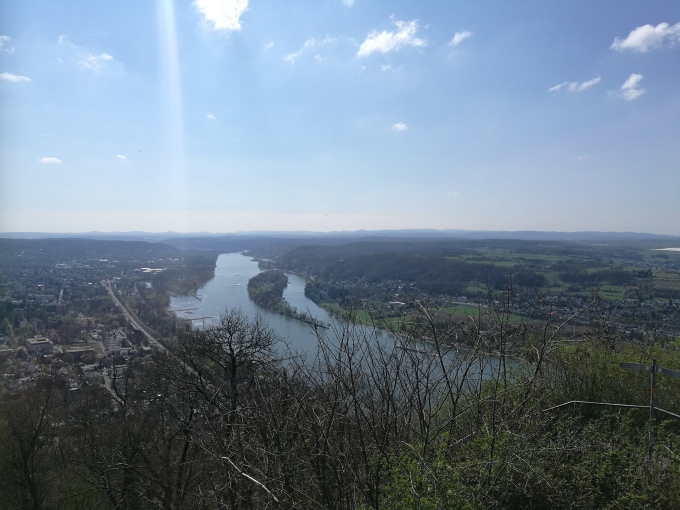 After continuing up the mountain, we reached the top where the ruins of a castle from the 1100s is located. The view is majestic. Absolutely stunning. The photo cannot do the landscape justice.

You can see the Cologne Cathedral when you are up there! That’s 75 kilometers!

I was also excited about the Zahnradbahn 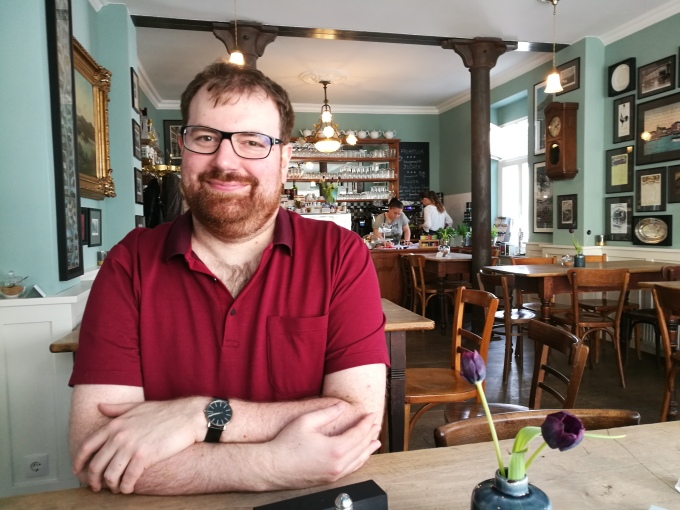 And, of course, fika!

You know how D.C. and Kungsträdgården are hyped for their cherry blossoms? Apparently, we have that too here! We went to Bonn, the former capital (and a charming international city), has two streets that are lined with cherry trees. Spectacular! It’s like a roof of pink flush. The downside? Everyone was there. All ages, all nations, all with smartphones. Some with high-end cameras and selfie sticks – those were the Instagram models I assume. The most awkward sight was maybe the young man going down on one knee amidst hundreds of tourists to propose to his girlfriend. But…she said yes! 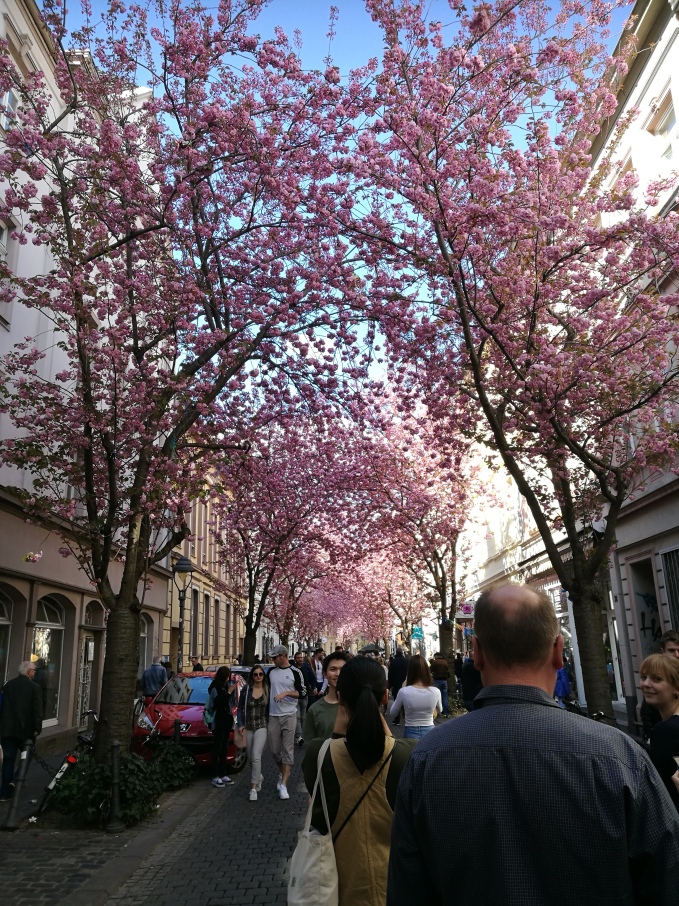 When I think of Frankfurt, I think of three things: Saint Paul’s Church, the skyscrapers and the fact that Frankfurt always wanted to become Germany’s capital. The founding fathers of the German federal republic decided to choose Bonn instead, to emphasize that this was only a temporary solution and they aimed for a reunification with Berlin as Germany’s capital. Not sure how Bonn feels about having been a makeshift.

Last Thursday, I went to Frankfurt for my first event with work. I took the chance to meet up with my oldest friend Marlene (we met in kindergarten alsmost 25 years ago) and my friend Juliana who I used to lived with in Stockholm. My impression of Frankfurt was that it is an underestimated city – I should go back and do a city tour: Saint Paul’s church happens to be the place where the German revolutionaries tried to establish a democractic Germany in 1848. (It didn’t go so well in case you wondered.)

This weekend, my dear mother visited and we also went out of Düsseldorf to Kaiserswerth. Kaiserswerth (meaning The Emperor’s Isle) is a part of Düsseldorf and only 7 kilometres from where I live but it feels like its very own universe. The part of town has been spared from the Second World War and its historic pretty houses are well preserved. Absolutely charming!

Random Kaiserwerth Boy looking down on us

This is the hospital, no kidding. 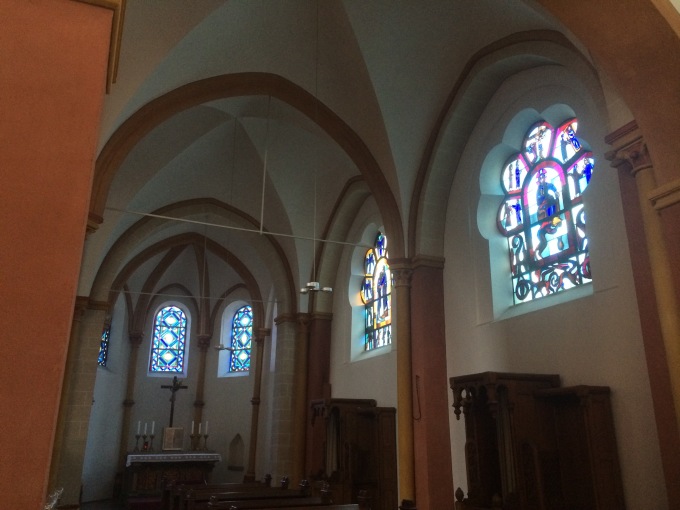 The Basilica with beautiful blue windows 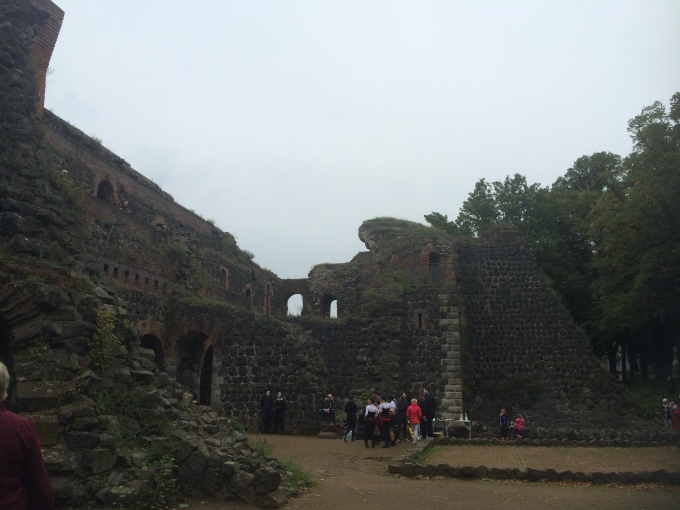 One should travel more in one’s own country. Because there are amazing things to discover. Like yesterday, when I made my long, expensive way far out west to Bonn and Cologne. I thought I was only travelling to a different part of Germany but it turned out I travelled in time as well.

My friend Maike recently moved to Bonn and this weekend, was throwing her first party. Since it is my New Year’s resolution to party more, I promised to come. They told me,Bonn was only some twenty minutes away from Cologne (not true, it takes forever to get there) and Bonn used to be the German capital. Now you are all like, “What do you mean, capital, isn’t Berlin the capital?!” Well, it is now and was then but when Germany was divided, someone decided that Bonn should be where the German government should have its seat. So from 1949 to the Nineties, Bonn was the center of power.

When I stepped off the train in Bonn, I truly felt like I had been catapulted back into just that time. It is like Bonn tries to conserve its time of importance by leaving everything as it was then. The signs in the metro – and the metro itself – look exactly like when I was 5. The logos on the signs are not even in use anymore. It is very fascinating. It is just like time travelling! 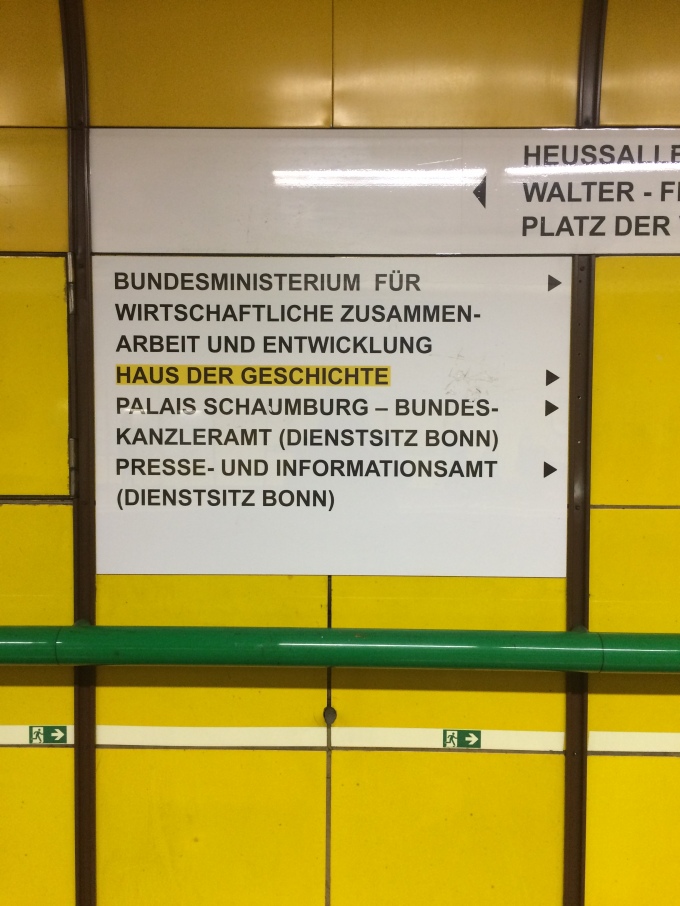 These signs show the way to all the federal institutions which remind the visitor that this used to be the capital.

Speaking of time travelling, the first thing I thought about when I heard Bonn was of course the Haus der Geschichte, History’s House, a museum located in Bonn. I have always wanted to go there and so I rushed in there 90 minutes before they closed (I also took a major detour to go see it). Let me tell you, this museum is an excellent use of tax money. The museum is free (read: tax-financed) and there is countless museum staff everywhere. And they are even friendly when you approach them.

The museum itself is paradise for any person that cares about Germany, the past, the present or generally the world. Luckily, the Haus der Geschichte is a part of Bonn that has arrived in the 2000s which is clearly reflected in the museums forms of display. You are walked through 1945 to 2013ish and I can tell you, until 1960 I constantly had goose bumps. The original films of little children saying their names and “I am looking for my parents” from the end of the war when so many families were separated are just as touching as the posters the American allies put up, saying, “People of Berlin, the world looks to you and you are not alone, we Americans stand with you and will defend your freedom”. (During the time of the Luftbrücke when the US allies transported food into West Berlin by plane because the Russians decided to, with a blockade, try and starve West Berlin into joining socialism.) I also learned, by the way, that Sweden sent care packages with toys and food for the German children.

I had the pleasure of being hosted by #mydanishintern in her lovely new apartment in Cologne. The photo shows Cologne’s most famous landmark, the impressiv cathedral 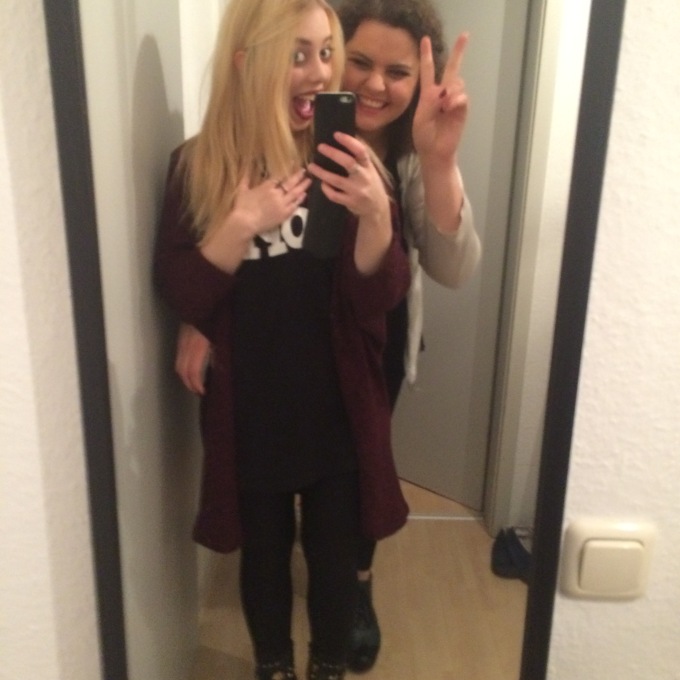 Reunited with #mydanishintern, an excellent host

I think all countries’ history is interesting, but Germany’s history lies closer to my heart for patriotic reasons and because it is more intriguing as so much happened – both absolutely shocking and terrifying things and unprecedented success. The spectrum is just very large.

If you ever go to Cologne or Bonn, make sure to pay History’s House a visit. Everything in there is just so interesting!

To put it with the great German poet Schiller’s words (in my mediocre translation),

“Every day, history becomes dearer to me. I wish I had studied nothing but history for ten years, I believe I would be a whole different person”. 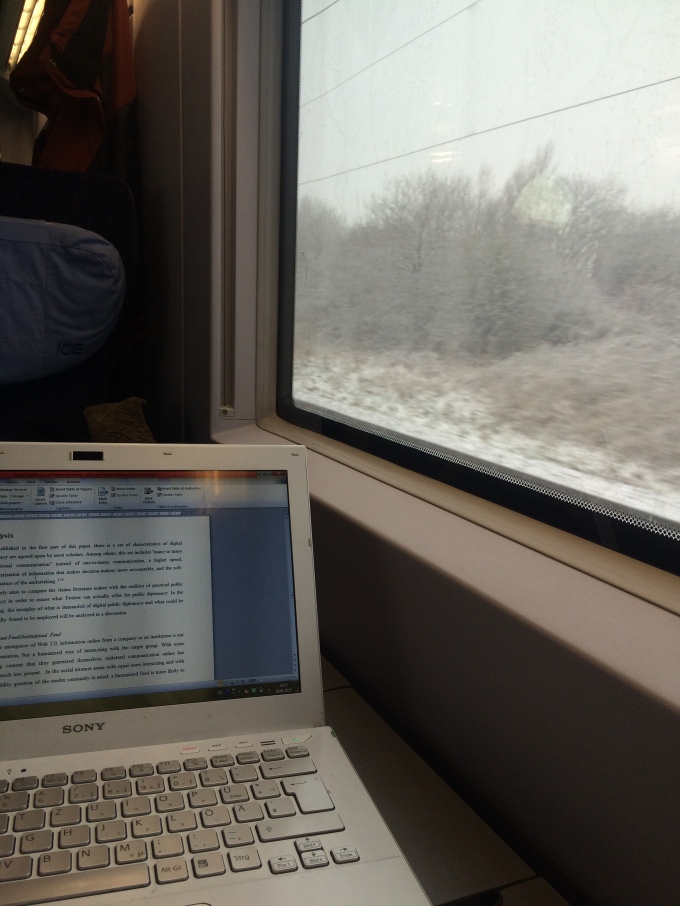 Train on the way to Bonnn, writing an article.

On the way from Bonn, carpooling in a very dirty 1990s car with 9 people.

P.S.: I also realized on my journey that I am so much more of a train person than a car person. I am close to saying that I would rather stay home than go by car, but that might be putting a bit too drastically.