I am a funny traveller. I plan to go places all the time (mostly because someone I love is there) and when I need to start travelling there, I despise the process and want to stay at home. But now I’m here, safely landed in my dear friend Linus’ apartment where I get to monitor the flowers while they’re gone, and I don’t regret getting on that plane. Talk about ambivalence.

When I packed for this trip in Düsseldorf four days ago, the weather report stated that it would be zero degrees Celsius at the lowest, no snow. I considered leaving my snow pants at home  but my friend Michelle clearly instructed me to bring them. Let me tell you this: there are minus degrees and it is snowing in Stockholm. I have lived in Germany so long by now that I forgot how troublesome it is to drag a 20-kg-suitcase through un-cleared streets full of snow. 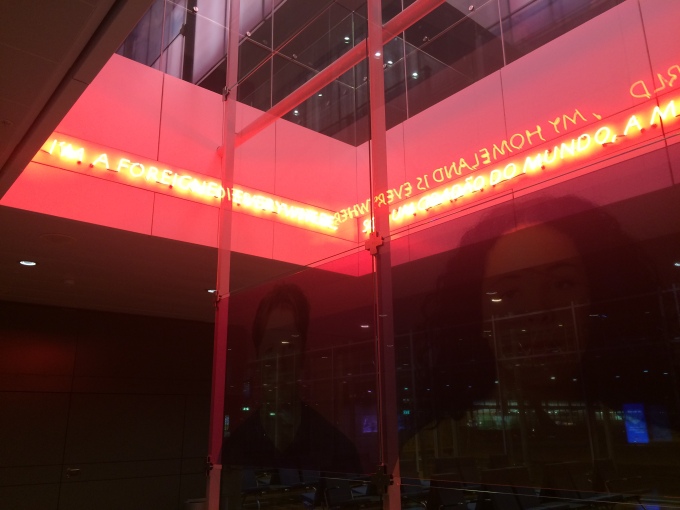 When we landed in Arlanda, the entire terminal was dead. Nothing opened, no people anywhere, basically a ghost terminal. Also, the 8-o-clock-flight from Hamburg always lands as far away as possible from the center of the airport. Today, as I strolled through the terminal, I noticed things are happening here (they may very well have been there longer but I never saw them). They put up large installations by Marie-Jo Lafontaine. Transparent portaits of young people, along with neon letters in all languages of the world, reading: “I am a citizen of the world, my homeland is everywhere, I’m a foreigner everywhere.” I thought it was very fitting for the place, our times, and my life.

The next sign I encountered was more easy-going, in the elevator at the station. Even in Stockholm, they combat public urination. But they do it in a funny, almost charming way, with a little fellow protectin himself with an umbrella and asking to please not pee in the elevator.

Other than that, I’ve managed to meet my friend Mia and hear about new developments at our former shared workplace, boost the Stockholm economy by spending lots of money on…what, actually…public transport I guess, and finding the place I want to go to tomorrow thanks to my favorite magazine amelia (an old women’s magazine according to my friends): Fotografiska, the Photography Museum has opened a store in central Stockholm and I am in need of a large above-sofa-adornment. Maybe there’ll be a match.