I got to the airport 15 minutes before take off and made it. We were only ten passengeres going to Dizzel.

Actually, I was thinking of giving you a third Leipzig post but life has just been happening all the time since I returned…I’ve spent a substantial part of the weeking working on a secret project that I can’t talk about yet (yet!) and I’ve also had a far-travelled guest: Gerrit, who just spent a year in Tanzania and now speaks fluent Swahili. It sounds really cool! 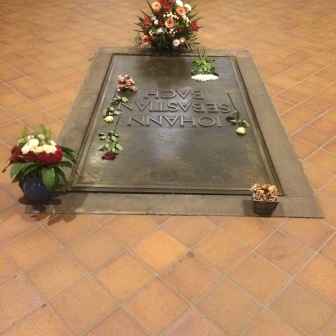 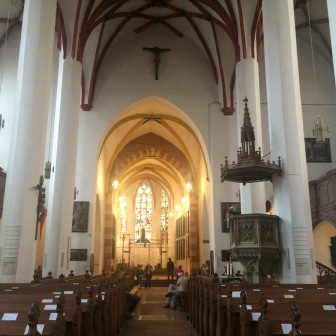 The two last picture show: a very interesting selection at the street market, and one of the impressive locations I looked at, my second favorite

But let’s pay some more tribute to lovely Leipzig. I managed to pop into the two most famous churches. Saint Nicolas is not only gorgeous, it is also where the Peaceful Revolution of 1989 started. Cabaret artist Bernd-Lutz Lange said about the events which started in the St. Nicholas Church: “There was no head of the revolution. The head was the Nikolaikirche and the body the centre of the city. There was only one leadership: Monday, 5 pm, St. Nicholas Church“. If I understood correctly, the Monday prayer is still held today,  5 pm.

The other important church is Saint Thomas where no lesser than the great Johann Sebastian Bach worked for nearly 30 years, and where he is also buried. Of course, it is also home to the world-famous Thomaner Boy Choir. Actually, it seems that every important person in history has been hanging out in Leipzig. Mendelsohn, Goethe, Schiller, and I guess/hope some women, too. Goethe’s studies in Leipzig even inspired him to set parts of his “Doctor Faustus” in the Leipzig tavern “Auerbachs Keller”.

In town, I came by a crowd with headphones and upon looking closer, I saw that it was a silent concert. There was a band playing without making a sound and the bystanders listened through their headphones. That’s a pretty neat way to not disturb anyone. 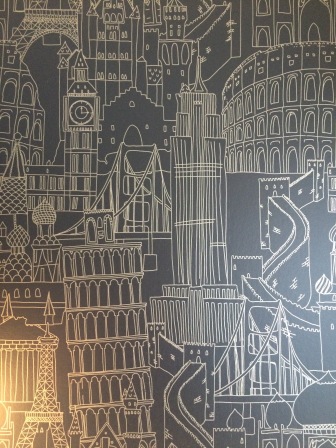 Mostly I was checking out locations for work though and among others, I was guided through the hotel. They really wooed me. They put Swedish stuff on all the screens in all the hotel and even set out a real Dala horse! Also, they have really nice wallpaper.

A very pleasant surprise upon coming home was finding my tax refund statement. I will finally get a wardorbe! You can tell, my dreams are flying high. Other people want to travel the world, I just want to store my clothes.

Tomorrow, I am flying to Gothenburg and as usual, I haven’t packed yet. But I’m looking forward!

Gerrit and me reunited, my dream, and a book I acutally bought (never buy books #library) for the holiday week