I am sitting in a clean, cushioned chair that obviously is part of an interior design concept and around me bell-like female voices sing about the importance of freedom. Did you guess where I am? Yes, at a Swedish university (hint: the cushioned concept chair) at my friend Malin’s choir practice. Her choir is due to perform at the welcome ceremony for the new students tomorrow morning and there is only one other girl in her voice who can be there so she did her duty and attends the practice. And I get to blog to a living testimonial to the choir culture in Sweden.

Yesterday, after more than seven hours of traveling, I made it to Karlstad where Malin lives nowadays. I am actually in Sweden for work, for a conference on Wednesday in Stockholm, but why flew up several times if you can combine trips. Karlstad is the capital of Värmland and the largest city in the province with 91,000 inhabitants. I have only been in Värmland three times in my life but I have had great times at Värmlands nation in Uppsala when I studied so I hold the province in high regard. It is also home to some famous Swedes, among them the founder of Ericsson, singers Zarah Leander and Monica Zetterlund, poets Nils Ferlin and Gustaf Fröding, and I believe most known: the grande dame of Swedish literature, Selma Lagerlöf.

Today, Malin took me to Lagerlöf’s estate Mårbacka for a guided tour. As a preparation, I had even started reading the only book by Lagerlöf that I own, “The Emperor of Portugal”. On the tour of the house we were the only people under 60 but I attributed this to the fact that it was after all a Monday. The estate was impressive – and modern, as she had such things as internal telephone lines installed in the house. Selma Lagerlöf, I learned, was an overall rather avantgarde woman. She took a loan to study to become a teacher when her father denied her an education, she cut her hair super short in 1891 she was the first woman to be awared a Nobel Prize (and the first Swede!), the first woman to be elected as a member of the Swedish Academy that awards the prize, she became a very active political influencer (as we would call it today), fighting for women’s right and suffrage. And she dated a woman.

And here we thought she was just that elementary teacher who wrote Nils Holgersson…I am putting some more Lagerlöf classics on my to-read-list. 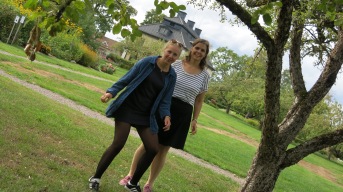 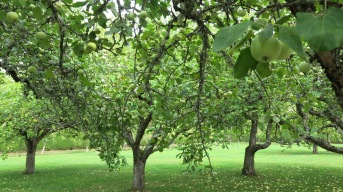 Mårbacka has lots of apple trees and we tasted a tiny apple that was surprisingly delicious. 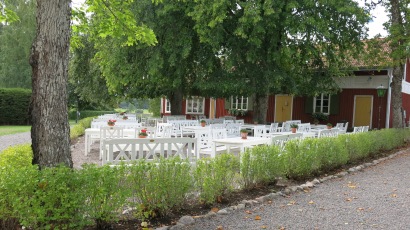 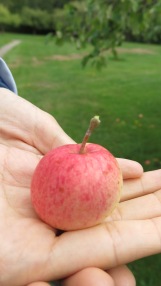 Selma Lagerlöf had a thing for peacocks. There was a sign with a story about how as a child, her leg was paralyzed and meeting a peacock healed her. Peacocks are still around and, as the sign informed me, are called “Sara and Pharao, as tradition demands”. I had no idea that there was a peacock naming tradition but I am glad I know now in case I ever get myself one.