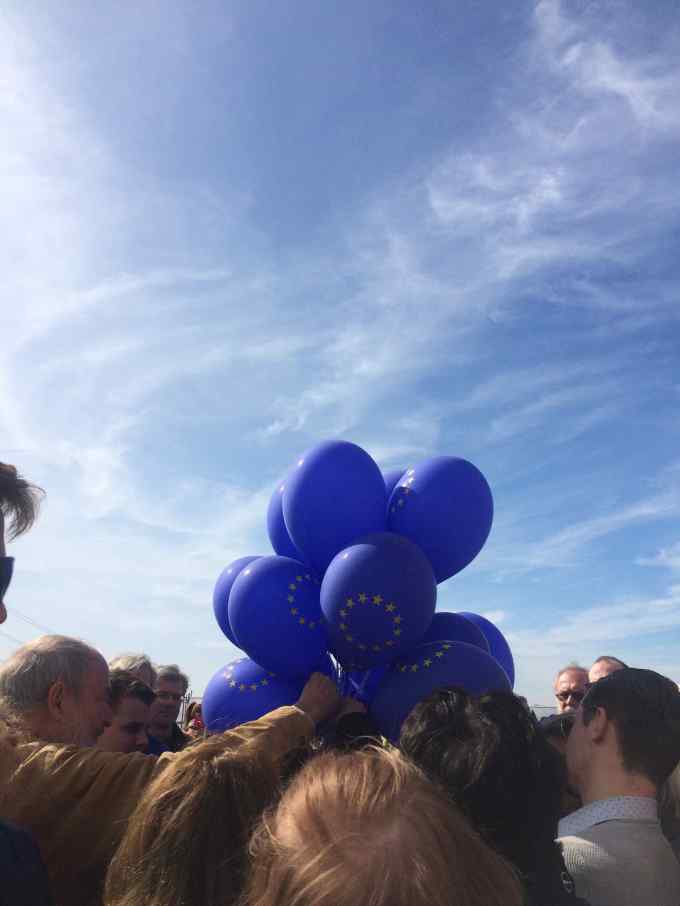 Today marks two important birthdays: Ingrid‘s 29th and the EU’s 60th. I love them both. Acutally I love the EU so much I attended the March for Europe today with my choir friend. All those marches in D.C. have reignited my political spark. Thank you, Donald.

It wasn’t a march at all which was a bit disappointing (then again, this Saturday there is so much gong on in downtown Dizzel, you can’t possibly march anywhere) but it was a nice manifestation that there are still people who care whether we are a strong union or lots of small nationalistic states.

We also became the interest of almost every attending photographer/cameraman, both professional and amateur, because we were the only ones refering to the 60th birthday. So now not only does the EU give me money, rights and friends – even fame!

Also happening today: start of the countdown to the Grand Depart of the Tour de France which will be in Düsseldorf, of all bike-unfriendly places

After speeches (not the best way to enthuse the masses for the EU) and European pop music (minus Bob Dylan’s song), the university’s choir and orchestra appeared and performed the European anthem, “Ode to Joy” that we were asked to sing along to. As we, next to the river Rhine connecting five European countries and Switzerland, chanted “What routine has split asunder, thy enchantment will rebind”, lots of blue balloons with golden stars were released into the perfect blue sky. We didn’t manage to get a hold of one as there were too few. At the very same moment, the same thing was done in 50 other European cities. “We sent 200 balloons to Bucharest”, the host on stage informed us. “So that they could do the same”.