When I was in New York City, I was very surprised how I didn’t feel it was very crowded. I had expected the city to overwhelm me with its many inhabitants and tourists, to give me some kind of claustrophobia with all the people and skyscrapers. It didn’t at all and after being in downtown Düsseldorf a sunny Saturday today, I start realizing that maybe it’s because this town has made me used to crowded spaces and people everywhere. I don’t even know where all these people come from in Düsseldorf, it feels like all of the Netherlands come to visit and every single local citizen also takes out to the street of the Old Town. It’s literally more crowded than New York City – how is that even possible?!

But I will admit, if it had been 20 % less people, this would have been a perfect day. Suddenly, unexpectedly, spring returned today and bathed the cobblestone streets in sunshine, bringing out the lush trees in the alleys. I didn’t have time to sit down at one of the crowded restaurants until late in the afternoon though because I had agreed to help with promoting Sweden at the annual Europe Day. I borrowed a folkdräkt from a friend, put on my Tre kronor charm Andrea once gave me and was ready to sell dozens of cinnamon buns. 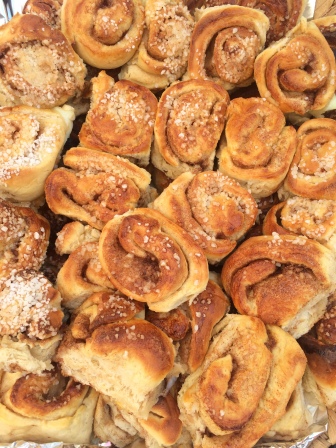 It was an interesting experience: a Dutch young man, probably part of a stag night, stopped and sang for me, an old lady told me her story of interrailing to Narvik as a young girl, another lady asked me why Crown Princess Victoria wasn’t there (“She’s so nice, she’s so incredibly nice!”), a Frenchman who had lived on Söder tried his Swedish on me and people asked us, somewhat accusatory, why we were not all blondes.

It was not that easy to sell the buns because when Europe gets together, there is serious competition: Belgian waffles, Portuguese natas, British fish ‘n’ chips, Spanish churros. Whatever you say tomorrow, Marine, I’ll always love being United in Diversity.