When I moved to Dizzel, it was my resolution to not use public transportation. “I don’t use busses in small towns”, I told my friend last week with all my Hamburg Haughtiness. (Which is a total lie because I lived in Bremen, roughly the same size as Düsseldorf, for more than three years and always used the tram.)

Anyway, my resolution was going very well, no rain, no strom, no snow, no hill could keep me from cycling to work. But then last week – my bike died. The felloe broke and the bike repair men told me it is not worth fixing. Somehow I have an emotional bond to my things, especially my bikes. While I can declutter paper stuff very well, I have a hard time letting go of my road companions. Actually, I have not abandoned a bike since five years. The first one I sold into the loving hands of my friend Martina in Stockholm, the second one, Pernille, became Ingrid’s. If you want to become the bike sitter for my yet unnamed green Kaputtbike, let me know.

Before I get accustomed to the frustrations of public transport again, I bought a new bike. It was a difficult decision but just like with my laminate, I decided it is not smart to look at every potential alternative in town. Now, I own a new bike that my colleague saw and immediately called “Svarta Faran”, the Black Chariot. 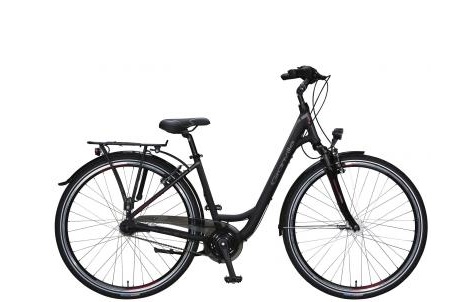 One thought on “Black Chariot”