Hello from the other side! I have been admitted to the States! I actually made it through border control at record speed, 43 minutes after landing I was out at the Freedom Shrine waiting for Emily. (Yes, Freedom Shrine. God Bless and everything.)

I will admit that I was not very comfortable going through border control. Partly because I never have to do that. Literally the last time was 12 years ago and also in this country. Because I never travel outside of the EU so I just walk into Belgium, Sweden and Portugal like I own the place. In America, it’s more like I walk in trying my best to come across as the perfect daughter in law. After endless hours on the plane, not to mention the ticket price, it would not be fun to be send back. Not that I there is any reason to send me back but in Europe, people always retell these stories of people giving border officers a strange look, pissing them off so much that they were refused entry.

Different from 12 years ago, there are now self-border-control-machines (and wifi and tinder and whatsapp didn’t exist back then either). I chose the German language one because I wanted to err on the side of caution and be 100 % sure I would not get anything wrong. Unfortunately the translation was kind of odd so the English version would definitely be easier to handle. At the end, they make you take a photo of yourself which is printed on a slip of paper you have to hand to the officer. You only get one try to take the photo. When I saw mine coming out of the printer, I was like, “Oh geez, I look like a criminal on drugs. Now I know why everyone reapplied their make up before landing!” I am very thankful the officer let me in despite that photo. 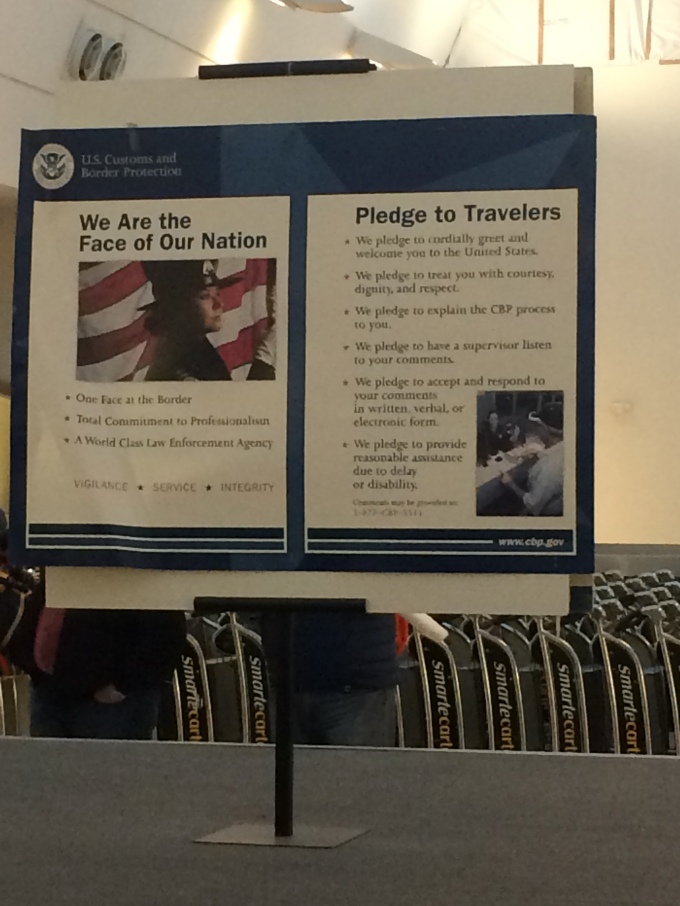 So in the arrival area there were literally at least five signs saying this. “We will treat you with respect and dignity when you go through border control”. Eh, why do you even have to say that? Non EU readers, are there these signs in Europe as well when you enter?

It only took Emily and me three times as long to get home as usual. The train stopped for like an hour because something broke down. Emily called it “a real DC commuter experience”. I didn’t mind because after being so bored on the plane, I finally had great company. At her house, I am now familiarzing myself with how everything works. It’s Wonderland for me. It’s actually foreign, an experience I don’t have often. I’ve been texting Emily all morning (yes, it’s morning here, I am still so amazed by time difference. It’s great, I won 6 hours last night!).”How do I open the window? Is the tap water drinkable? Your fridge keeps beeping. How do I get the shower to work?” I am very fascinated.

Emily also did me a huge favor. This morning while I was still slumbering in my guest bed (amazing bed! the best bed! terrific bed!), she got me a ticket to the National Museum of African American History and Culture. It’s so popular that if you don’t get a ticket at 6 a.m., you won’t get in at all because the queues are immense. So that’s where I am going now, in splendid sunshine and zero degrees.